Oasis in the city 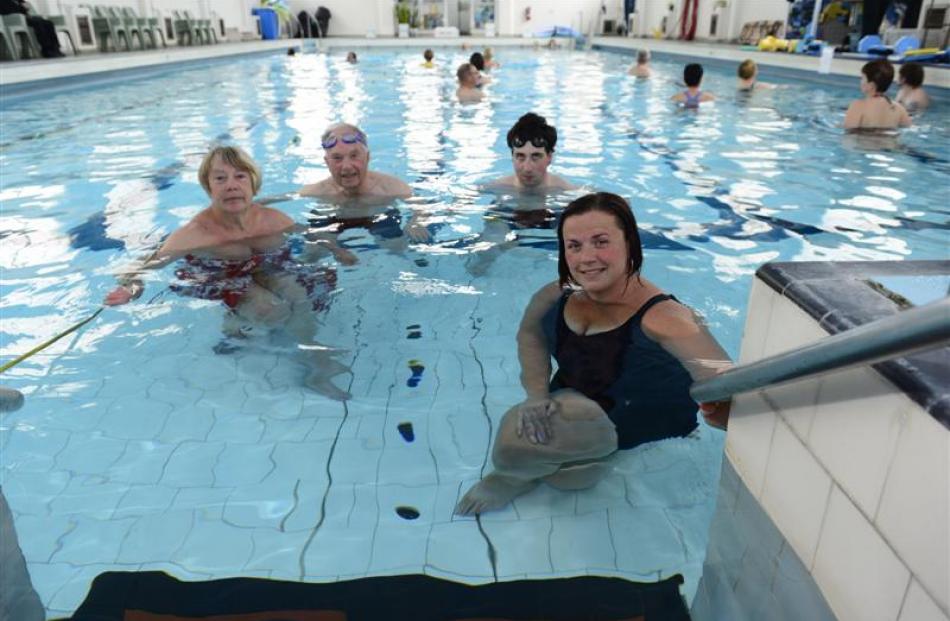 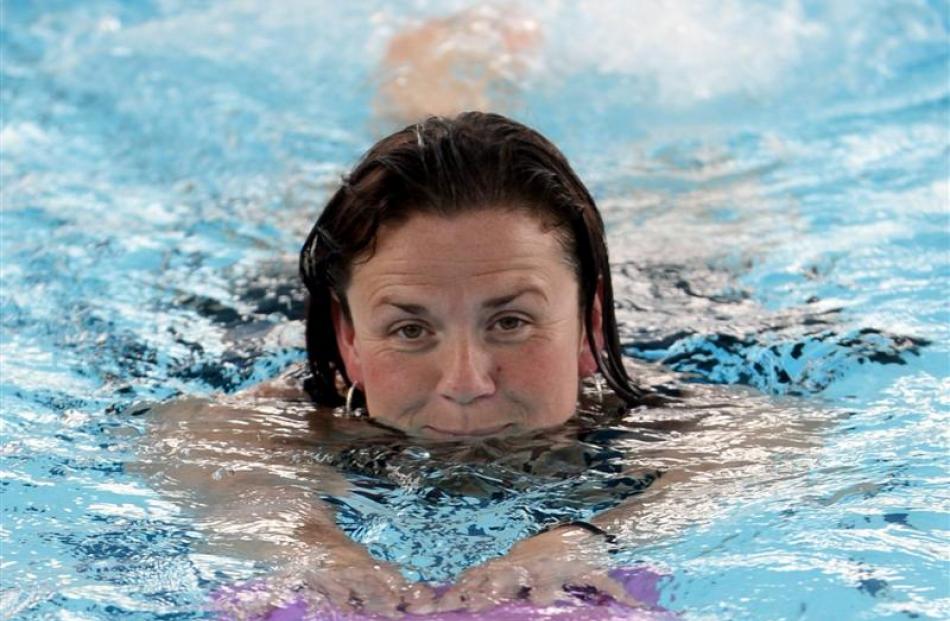 Swimmer Kathy-Jo Dobson uses a flutter-board while putting in a few lengths at the Physio Pool. 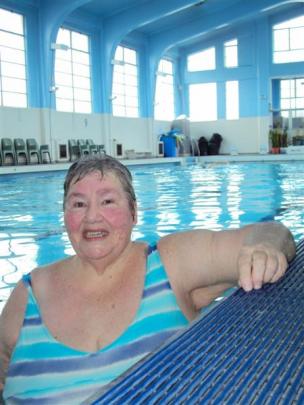 Rosalie Cunningham (71), of Warrington, who exercises and swims laps three times a week at the Physio Pool to keep fit, would not want to see it shut for long because "so many of us depend on it". 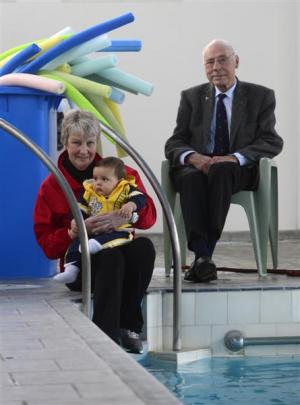 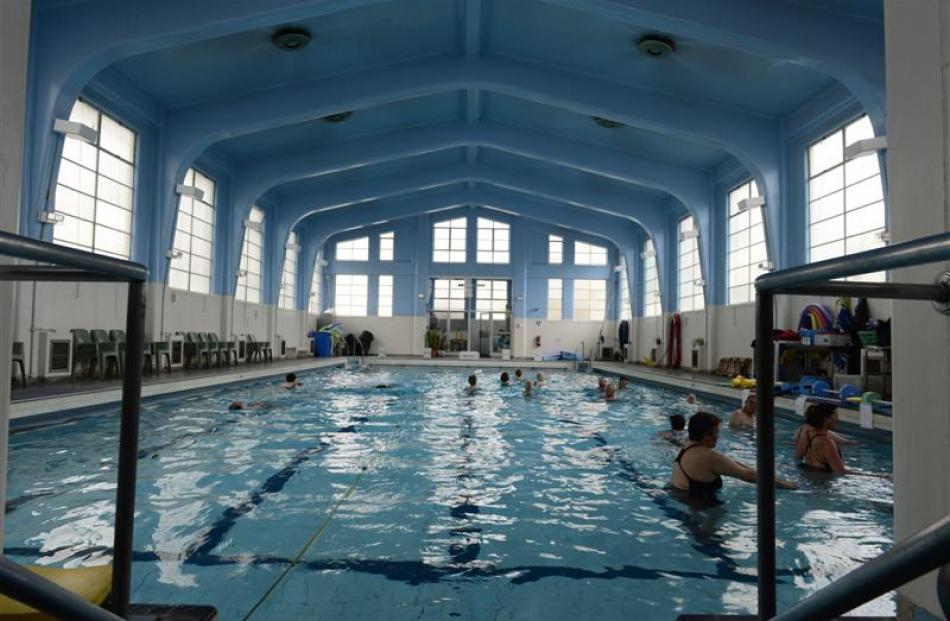 The interior of the Physio pool. Photos by Peter McIntosh.

Heart attack victims, nudists, Special Olympians, Muslim women and physicians are among those who say Dunedin's Physio Pool is a special facility. But a maintenance shutdown next month is likely to reveal the 66-year-old heated pool needs a costly and perhaps time-consuming upgrade, Bruce Munro writes.

It is 6.32am and the nondescript exterior of the Dunedin Physio Pool matches the mood of the grey, drizzly Monday morning.

But already the door at the top of the entrance ramp is open and the building's textured windows are illuminated by fluorescent lighting.

The only hint from outside that this is a historically significant and widely used therapeutic pool is a canvas sign which states: "The Physio Pool ... Open to the public" and ambiguously suggests the water is plus or minus 35degC.

Five people, three women and two men, are already in the bath-warm water doing laps or aqua-jogging. During the next five minutes another three come in, pay the lifeguard and head for the changing rooms.

Phil Ward, a vehicle warrant of fitness inspector, is taking a breather after a few warm-up laps in the fast lane.

He is in here two mornings a week, as soon as the pool opens, for an hour of swimming.

"It gets it out of the road early in the day. It's an enjoyable chore," Mr Ward says.

He has been using the pool for three years, following a car accident in which he broke his back.

Swimming was an important part of his rehabilitation, and a habit which he has maintained to keep fit.

"I need the warm water. Any colder than this I freeze up - my back goes into spasms," he says.

The Otago Therapeutic Pool, to give it its proper title, has been a source of warmth, exercise and rehabilitation since it was opened on Dunedin Hospital land on the corner of Castle and Hanover Sts in 1946.

The building was designed by prominent Dunedin architectural partnership Mason and Wales.

According to the New Zealand Historic Places Trust it represents mid-century modern utilitarian architecture and is "an early example of portal frame reinforced concrete construction". The trust gave the pool a category two listing in 2005, deeming it a regionally significant historic place.

The Otago Therapeutic Pool was the first large purpose-built therapeutic pool in the country.

As well as being used for the rehabilitation of tens of thousands of hospital patients, it has played a role in training many of the country's physiotherapists.

These days, as well as being closed to the public for a couple of hours each weekday morning for the exclusive use of hospital physiotherapy patients, the pool is used daily by private physiotherapists and their clients during public sessions.

Physiotherapist Andrea Mosley says the water temperature and quality, the facilities such a hoist chair, and the variable depth of the pool, make it ideal for working with severely traumatised clients.

"We have people who come from Balclutha and Oamaru because they need water of that temperature for their therapeutic programme," Mrs Mosley, who is co-owner of Rata South, said. "I think it is Dunedin's best-kept secret."

The pool is also significant for the role it played in the international development of hydrotherapy for heart attack patients. Prof Edwin Nye (86) said exercise of any sort was uncommon for coronary patients when he began experimenting with it in about 1968.

"Up until then, if you had a coronary you lay in a bed for three weeks and were told not to move," Prof Nye said. "And the advice afterwards was very vague because no-one knew what to advise."

With the help of a "sympathetic physiotherapist" he began work on mobilising patients. "And then I thought non-weight-bearing activity in a pool could be good."

It grew from there.

In Dunedin, former heart patients formed themselves in to what became known as the Otago Phoenix Club. Members met twice a week for gym, sport and swimming exercise.

A handful of Phoenix Club members, including former club president Keith McFarlane (77), still use the pool each week.

Mr McFarlane has been doing 20-lap sessions there since being operated on for a blocked artery more than 15 years ago.

His first stint at the Physio Pool, however, was in 1962 after almost losing a leg in an accident.

"I've had the benefit of the pool through the years," he said.

Not feeling so fantastic about the pool were health board officials who in 1983 planned to close it. The public outcry that ensued led to the hasty formation of the Otago Therapeutic Pool Trust to operate the pool while the board maintained it.

Neville Martin, who is the trust's secretary-treasurer, said the trust was formed "to make sure the pool remained a facility open to the community".

He is one of four trustees who report to a board of management comprised of organisations with an interest in the pool.

The trust hires qualified lifeguards to oversee public pool sessions and pays for cleaning and hygiene. It also pays rent to the health board.

The SDHB is responsible for maintenance and other running costs. In its latest financial return filed with the Charities Commission, the Trust said it spent $139,310 in the previous 12 months. The SDHB spends about $144,000 a year on fulfilling its role.

It was not until the trust was formed, almost 33 years ago, that the pool was opened to the general public. Today, of an estimated 50,000 annual visits to the pool, 80% are during public sessions. And, like Rosalie Cunningham (71), many of those public-session visitors use the pool more than once a week.

Mrs Cunningham exercises and swims 20 lengths of the pool three times a week, as she has done for the past 12 years since arthritis made other forms of exercise too painful.

The pool is "absolutely wonderful", although she does "sometimes think it could do with an upgrade".

"But I wouldn't want to see it shut down for any length of time. So many of us depend on it," she said.

IN addition to former and present patients and public swimmers, the pool is used by about half a dozen diverse community groups. Through them the pool has become a place of refuge and social interaction as well as rehabilitation and fitness.

Special Olympics swimmer Philip Lomas (29) has been participating in the group's Wednesday evening coaching sessions at the pool for more than a decade.

He says he enjoys competing and making friends with the other 25 swimmers in the Special Olympics development and competition squads.

His coach, Margaret van Betuw, said the warmth, privacy and convenient location had made it their venue of choice for the past quarter-century.

Privacy is also a key consideration for the Orchard Sun Club.

"We like to socialise without our clothes on. It's a great equaliser," Mrs Mullen said.

The club has facilities outside Dunedin. So being able to use the inner-city pool "helps us maintain contact, especially during the winter months".

Despite having a membership of 28, the club nights attract up to 40 swimmers.

"We also have supporters who aren't members but enjoy a nude swim."

It is a different view of bodies that has seen Muslim women also regularly hiring the pool.

Since 2010 about 30 Muslim women have been using it for a couple of hours each week, Zarghona Lafraie said.

"For us, we can't just swim in any pool. It has to be women-only and out of sight of the public.

"The Physio Pool was just perfect. We closed the door and we had it all to ourselves."

But the cost of hiring the pool brought that to an end late last year.

The women hope efforts by migrant community co-ordinator Barbara Johnston to get funding to enable migrant women to use the pool will have them back in the warm water next year.

Although the Physio Pool has been "holding its own in terms of its place in the community", there has been a decline in the number of users, Mr Martin said.

"It's a small decline, but a decline nonetheless."

As a result, and with costs increasing, the trust has been running deficits for several years. In the 12 months to the middle of 2011, the deficit was $14,783. These deficits are being covered from reserves built up in profitable years during the 1990s.

Mr Martin attributes the drop in patronage to an increase in alternative recreation options and the "impact of deferred refurbishments".

The pool needs upgrading - the trust and the health board both see this as essential, he says.

Water-cleaning equipment, pipework, and the water-heating system all need to be tackled. The changing rooms need to be refurbished and pool tiles replaced. And it would be good if the windows could be double-glazed, he added.

Sharon Mason, who is SDHB's general manager of Otago diagnostic and support services, said the full extent of the upgrade would not be known until the pool was drained when the facility was closed just before Christmas.

Because of that, the cost of the upgrade was still uncertain, Ms Mason said.

"We are also unable at this stage to advise when an upgrade will occur and how it will be paid for. This will need to be discussed between the DHB and [the] trust," she said.

"With regards to the pool's future, we hope to continue to provide the current service to patients."

Mr Martin said the pool was normally closed for four weeks during the summer break. But he was uncertain whether it would be ready to reopen, as usual, late in January.

"It's unsettling for the trust and for pool users," Mr Martin said.

"I think there's a few more years left in it [the pool] as it is. But it won't have a future unless it's refurbished. And it needs to be refurbished because it plays such an important role in the community."

• Built in 1946, it was the first large, purpose-built therapeutic pool in New Zealand.
• Has about 50,000 visits by users each year, including patients and members of the public.
• Is owned by the Southern District Health Board but run by the Otago Therapeutic Pool Trust.
• The water temperature is 35degC.
• Public sessions are Monday to Friday, 6.30am to 9.30am and 11am to 6.45pm, and Saturday and Sunday, 8am to 11.45am.
• A single visit for an adult or child over 5 is $6.
• Concessions are available for regular users, students, seniors and those with medical certificates.