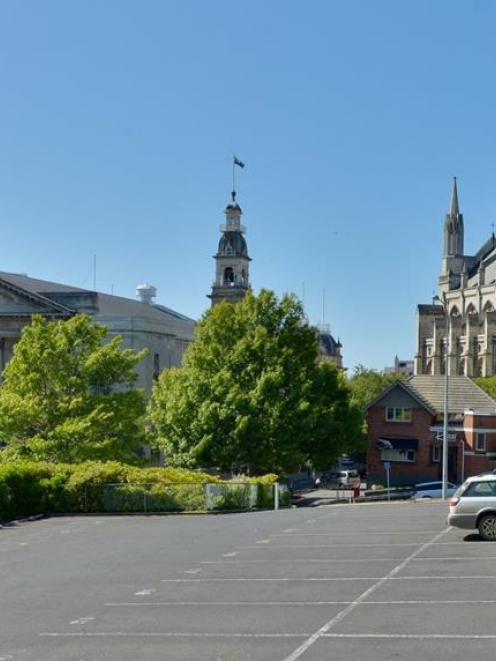 The Filleul St/Moray Pl car park opposite the Town Hall is a possible site for the five-star hotel. Photo by ODT.
Dunedin's accommodation sector is divided over the prospect of a new five-star hotel, as words of welcome mix with warnings of a price war.

The divergent views came after the Otago Daily Times reported plans for a five-star hotel opposite the Town Hall, and a four-star hotel on the city's waterfront, were being progressed.

Motel Association Otago president Gavin Turner said yesterday the developments, if confirmed, would be "good news'' at a time when visitor numbers were climbing in Dunedin.

That growth meant a bigger pie to share between existing operators and new arrivals, meaning everyone stood to benefit, he believed.

"Good new things that may bring in different people will always be good for the town, and we all have our niches in the marketplace.

"You've just got to look at the inbound numbers to New Zealand . . . the pie's going to get bigger and we'll need the infrastructure. Beds and sightseeing activities will have to grow side by side, because the numbers are coming.''

However, Scenic Hotel Group executive director Lani Hagaman said there was still not enough year-round demand in Dunedin to justify two new hotels, and she was "cautious'' about projections of growth.

Summer might be busy, but existing operators were still fighting each other for business during Dunedin's winter, and a five-star hotel would only exacerbate that, she said.

"Some people would go and stay in a five-star hotel, but not 365 nights of the year, and not hundreds of them.

And if it did not, she said, a five-star hotel would be forced to cut its rates and compete for business with existing operators, forcing them to do the same.

The outcome would be worst for moteliers, as the smallest operators.

"The moment things get tight, and they suddenly come down into everybody else's area, then yes, that will have an impact.

Despite that, Mrs Hagaman insisted she was "not against growth'', just the spending of ratepayers' money by the council in an attempt to attract a competitor to the city.

Her comments came as figures released yesterday showed the city's 2467 commercial beds had a 60% occupancy rate in the year to October 2015, while commercial visitor nights were also up 3%, to 894,755.

Future growth projections were still based on Ministry of Business, Innovation and Employment national forecasts, which anticipated total visitor numbers would grow 32%, from 2.9million a year to 3.8million a year, by 2021.

The Dunedin-based spokesman for the group behind the five-star hotel, still speaking on condition of anonymity, said the hotel would operate in a "new market segment'', meaning Mrs Hagaman's hotels "may well benefit''.

The Kingsgate Hotel, located just above the five-star hotel's Filleul St development site, would lose some of its views if the project proceeded, but staff there declined to comment yesterday.