By Molly Houseman
15 Comments
A revelation a construction company was told by an Otago Regional Council staff member it could dump material into the Clutha River has been labelled "extraordinarily embarrassing" by a councillor.

The council did not initially say it had faced censure over the incident, but in response to further questioning said yesterday it had been issued with a warning for permitting Balclutha-based Andrew Haulage to dump the material.

It follows an investigation into the issue by the Environmental Protection Agency (EPA), which began in March after a Balclutha resident saw a truck with the company’s branding dumping waste building materials down the riverbank behind the Balclutha Aerodrome.

The formal warning letter, which was provided to the Otago Daily Times by the council, said Andrew Haulage managing director Colin Calteaux approached a council staff member in December 2020 while they were visiting his depot on unrelated matters.

Mr Calteaux asked the employee if he could put demolition material into the river to cover an area that was eroding.

The council employee allegedly responded by acknowledging they did not see any reason why Mr Calteaux could not do that, the letter said.

In January, he spoke to another staff member about the location where the demolition material could be put.

That staff member provided general advice on how the banks of the Clutha River could be protected, the letter said. 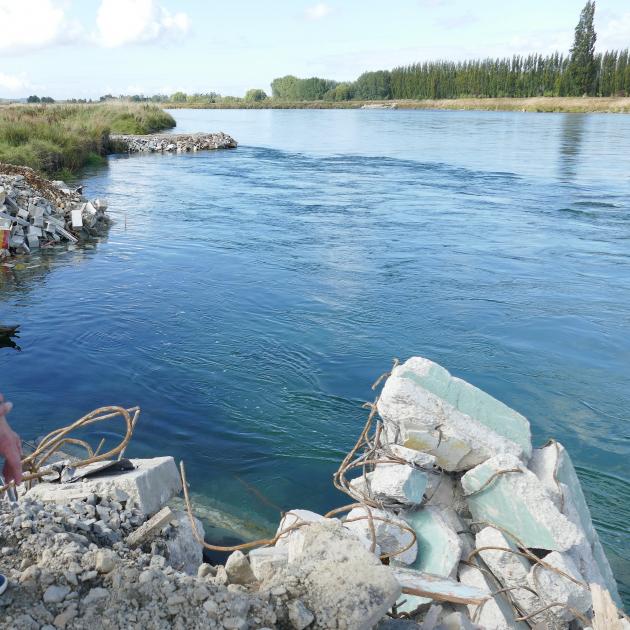 The warning said: "The ORC, through the actions of its employees, is considered to have contravened sections of the Resource Management Act by permitting [Andrew Haulage] to deposit any substance on the bed of the river when not expressly allowed by a national environmental standard".

Andrew Haulage has been issued with two infringement notices over the dumping.

Council deputy chairman Michael Laws said it was "extraordinarily embarrassing" that the council had advised a company which it later took enforcement action against.

"If advice was given, then there seems to be a whole series of people let down — from the construction company, to Fish & Game, to local residents and to the environment."

He said he was unhappy at the council’s "lack of transparency" to the public and to councillors.

"Obviously [council] staff knew long before governance [councillors] were informed, and that was only after it was obvious that the Otago Daily Times were going to write a story about it.

"That disturbs me greatly."

Cr Laws said the council had worked hard in the past three to four years after decades of neglect around issues that affected the environment.

"Given that drive — upping policy, upping staff, and upping rates to pay for those staff and policy — it is extraordinary to me that in the middle of 2021, you would have ORC staff advising people that they can do something that is clearly not right," he said.

Chairman Andrew Noone said the situation was "not ideal".

He also felt that councillors should have been informed of the investigation sooner, but did not want to comment further until the situation became "clearer".

The ODT understands an email was sent to councillors by council chief executive Sarah Gardner on Monday evening informing them a story on the topic would likely appear in the media.

The council did not say it was warned over the dumping when it issued a statement, saying the investigation was complete on Friday.

On Monday, in response to further questions from the ODT, the council said the dumping had resulted in a warning, but did not specify the warning had been made to the council.

Regulatory and communications general manager Richard Saunders said the council had not withheld any information on the incident.

Also, he said, the council would also not make any further comment until "the matter was concluded’’.

"There are processes that are followed when investigations are undertaken, regardless of which parties may be involved, he said.

"In this instance the EPA undertook the investigation to ensure independence.’’

The council did not answer questions about how much Andrew Haulage was fined.

The incompetence of ORC is extraordinary. The management in consents, policy and hazard departments are failing the ratepayers. We can be sure the ORC staff member wont get enforceme t action much like Natural Hazards office killing hundreds of fish in the Kaikorai Estuary. 100% the most arrogant and useless council in the south island.

Infringement notices, warnings and a cover up. Clearly NZ still doesn't take the protection of it's environment seriously. I am disgusted.

Here you are implying there has been a cover up by ORC, yet in a latter comment in reply to me, you say Andrews Haulage should be jailed or a hefty fine. So which is it......
And no, you are totally correct Pat, NZ doesn't take it's environment seriously...NEWSFLASH, no country does, we don't live in some dreamy utopia. We are a developing species, overcrowding, over polluting and rather brutal in our endevour for superiority and survival . We always have been, we always will be, it's in our very NATURE. Rosy glasses and idealist goals are the smallest cog in achieving our development as a race. The only thing we can't control are the natural forces, everything else is fair game, especially in a capitalist driven world.

1/2 glass full ... the "material will eventually break down and be forced downstream and out to sea by floods (1 in 50 years events only)

!/2 Glass empty ... the same can't be said of ORC staff that make stupid mistakes like this one ...

The ORC is an embarrassment. They think people will forget the 75% rate increase. This is the quality of leadership we get with the rate increase! Awesome eh?

are we hiring the right people in our local authorities? and richard saunders the bossman has now decided "its concluded" this coming from a staff member not an elected member. what is going on in the ORC? and why are we paying 75% more in rates for this type of behaviour.

Answer to first question ... categorically NO

75% more rates ... They just like to give themselves a bonus for doing all the marvellous work they should do and like the DCC, they just like seeing old and infirm people suffer even more ... electricity companies are pretty much of the same ilk !!

Councils are being run like businesses, however, it's a no heads will roll scenario if you stuff up ... if it was in the private sector half of the staff would have been sacked by now.

When's the last time a council member or head of department been publicly sacked after they've made a major stuff-up ??

Now let's see these incompetent seat warmers get their work gear on and go and pick it all up. Just like anyone else would have to do. I doubt any of the executives actually own any work gear.......no, they'll just get someone else to clean up their mess.
Andrew Haulage should NOT be fined in this instance. They were given permission by the ORC. The ORC were wrong in this, it's their problem. I would suggest the top brass all pitch in together and put this right......NOT the ratepayers!

Andrew Haulage should be made to pay the full clean-up costs plus a hefty fine or jailed. Only an idiot would think it is okay to dump industrial waste into a waterway.

If you take a look at the photos, I believe the 'industrial waste' you refer to is concrete and reinforced steel. They make breakwaters, bridges and culverts from this stuff, albeit, not in a broken condition. And interesting that you say "only an idiot" would think it was ok to dump the construction remnants, it turns out it was apparently an "idiot" that said it would be ok. That "idiot" was ORC staff. It's not the responsibilty of the truck driver to decide, he's the fellow being told what to, so why on earth would you send that man to jail. As for the Andrews Haulage staffer that applied for permission, which was granted, by a staffer at ORC, why should they go to jail? The Andrews Haulage staffer made a genuine enquiry and application. ORC, in it's power, gave the nessessary permissions, Andrews Haulage acted on that permission, as granted. No, ORC should be cleaning this up, they gave permission, they stuffed up. Issue them with gloves and gumboots and get on with it.
Very over reactive in my opinion Pat...Jail? Hefty fine? Shall we have Andrews staff hung drawn and quartered after a good flogging on the townhall steps, would that set the right example....to who, the ORC?

And no doubt you would like to see the orc get away with this scot free despite them giving the haulage company the permit to dump.....

Once again ORC demonstrates it’s failure to administer the Resource Management Act and in this case appears to not even know the rules in it’s own plan? The Council’s left hand does not know what the right hand is doing and seems blind to the incompetence of the administration. It really is time to engage staff and management who have relevant qualifications and know what they are doing. The last five years shows that this is not the case.

"The last five years..."
Are you new to the area?
The best and brightest have been beaten into submission for years by the bureaucratic seat warmers and ultimately yield for an easy life or more usually, just leave.

The orc, the same organization who flys overhead of trees on the riverbank spraying poison on them so the trees die, the trees branches then break off and fall in the water and clog up the rivers and in heavy rains the rivers dam up with the broken branches and you get flooding, do the orc care?.....not a jot.....

No half million dollar fine for ORC for sanctioning this vandalism then, unlike CDC received? Just a warning for ORC. And doubtless a pittance fine for Andrew haulage, who really shouldn't have been fined for doing something that they were told they could do. Outrageous.