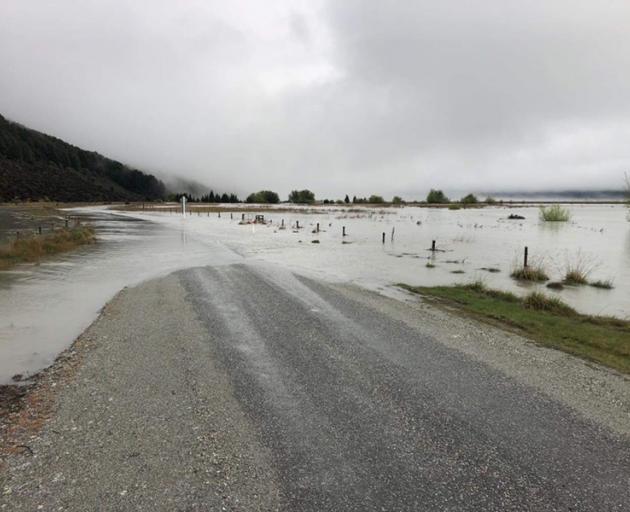 Kinloch Rd has been closed due to surface flooding. Photo: Downer
The Otago Regional Council is continuing to monitor rainfall and river flows in the region, despite MetService lifting a severe weather warning for the headwaters of Otago's lakes and rivers.

ORC duty flood officer Lauren Hunter said a severe weather watch remained in place for coastal Otago, and heavy rainfall was predicted in the area between this afternoon and Saturday morning.

Rivers and streams in South and West Otago were steadily rising, including the Pomahaka River, which was running at 96 cubic metres per second at the moment, she said.

However, flows were steady in Dunedin and on the Taieri.

"River levels are expected to rise, but large-scale river flooding is unlikely at this stage.''

Lakes Wakatipu and Wanaka were also rising, but were unlikely to reach flood warning levels, given the easing rainfall in the area, she said.

Two different lows affect NZs weather in the coming days. One near Fiordland keeps SI wet through the weekend. Another approaches the upper NI early next week, with strong winds and heavy rain. Here's a map of pressure and rainfall Sunday evening. https://t.co/Yjbq0jxdqz ^AJ pic.twitter.com/IyHUcctrlc

Meanwhile, Kinloch Rd, near Glenorchy, remains shut this afternoon due to flooding.

Queenstown Lakes District council, via social media, said just after 1.30pm the road was "closed to all vehicles" with surface flooding still at a high level.

''We're keeping an eye on it, but there is not major concern at this stage.

''The forecast for Dunedin City is within tolerable allowances, but the DCC has been doing pre-emptive maintenance work like clearing drains and putting contractors on stand-by, just in case.

''Obviously, the next 48 hours, it remains to be seen how [the weather] unfolds.''

The MetService had issued warnings for northern Fiordland  and the Otago headwaters, but these have now been removed.

Warnings remain in place for Westland about and south of Otira and for Canterbury High Country from Arthurs Pass southwards until 3pm today.

The Milford Road (SH 94) reopened on Thursday morning after being closed due to risk of avalanche.  However, road users were asked to drive with care.

MetService advised residents to keep up to date with the latest forecasts.