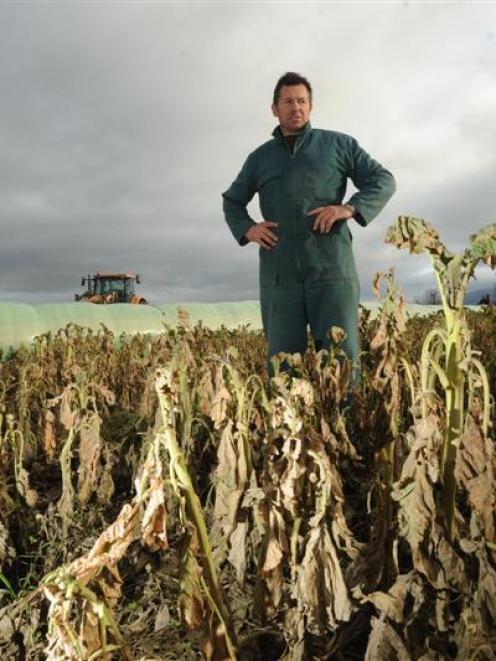 Taieri dairy farmer Shane Hildred stands in a devastated crop of chou moellier yesterday. The 12-tonne baleage behind him was moved 200m in floodwaters. Photo by Stephen Jaquiery.
Taieri farmers are still counting the cost of the Otago Regional Council's decision to activate floodgates during the May floods.

The council has been widely criticised by farmers and engineers for activating the floodgates before the Taieri River reached its 1360cumec threshold at Outram.

Dairy farmer Shane Hildred estimated yesterday he had lost at least $30,000 in baleage and crop.

"I had a nutritionalist out here this week and he assessed a 50% loss in utilisation. If you saw it in dollars and cents in front of you, you wouldn't be very happy."

More than 1.5m of water covered one of his paddocks.

"It was a completely different block of land. It was a pond. In six years, it's the worst we've seen here.

"It's also the worst debris we've had.

"I don't believe we needed to take on all the water we did. I would have thought we wouldn't have taken on any water at all if they [the ORC] hadn't dropped the gates," Mr Hildred said.

"It's the fourth flooding event we've had since we've been here and the first time we've taken on water. They didn't drop the gates the other times.

"The whole procedure was really disappointing. They ignored all the information from their weather stations and flow meters and made an outrageous decision based on nothing at all.

"This didn't have to happen. But I'd say the chance of getting compensation from the ORC is pretty slim," he said.

"I'm just frustrated at the regional council for taking the action they did and making this so much worse than they had to."

A spokesman for the Upper Pond Ratepayers Group which represents 21 farmers, Simon Parks, told the ODT yesterday the damage to Mr Hildred's crop was caused by the decision to drop the floodgates.

"His paddocks shouldn't have even got wet.

"If the gates were left up, the water would have spilled past and into the retention area where it was designed to go."

Mr Parks said farmers were keen to establish a dialogue with the regional council over the issue.

". . . they just don't understand the seriousness of the consequences of what they did. What they did is a complete contradiction of procedure. There was no warning and there's been no explanation," he said.

"We want them to answer two questions: Why were the gates dropped and what are the procedures?"