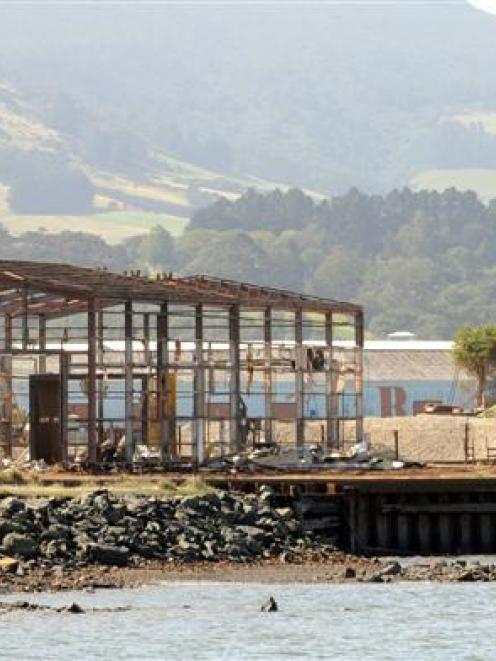 The proposed waterfront site is shown in this March file photo.
An "exciting" new option for the site of Otago Regional Council's proposed office block had been suggested to councillors in the days leading up to yesterday's decision to "park" its multimillion-dollar waterfront proposal.

Councillors voted 8-3 to remove the controversial $31 million office block and wharf redevelopment, which has so far cost $6.8 million including land, from the council's long-term council community plan.

They also accepted another recommendation from Cr Doug Brown that the council reconsider all options and move to solve long-term staff accommodation issues as soon as possible.

Chairman Stephen Cairns said after the meeting it was disappointing the project had been "parked", but there were other options, including one he described as "personally very exciting".

He could not divulge further details as it was commercially sensitive to another party, but hoped it could be made public as soon as possible.

"It's likely to be weeks. It shouldn't be months."

Councillors were informed of the option "within" the past week and it had been informally discussed before yesterday's meeting.

When asked by the Otago Daily Times if sites to be considered by the council included the old post office, Carisbrook or the Dowling St car park, Mr Cairns said these were "conceivable" but there had been no talk about possible sites yet.

The council was not working with the Dunedin City Council on finding a new site, he said.

Yesterday's decision required councillors to adopt a second pre-prepared version of the long-term plan without the building, but including $150,000 annually for building operating costs to provide for additional space, support and associated costs.

Cr Sam Neill said he had been consistently against the building because it was on the wrong site and too expensive.

Cr Duncan Butcher said he "took a bit of affront" at the suggestion councillors had not looked at all options.

They had, and had freely chosen the waterfront site because it met all requirements, he said.

"If we carry on and look at other sites then what is the cost going to be in two years' time?"Cr Gretchen Robertson said she supported the project but thought it would be "arrogant of us" not to step back and listen to what the community had to say, although the harbourside site could still stack up.

Looking at other options would "cost extra" but it was what people wanted the council to do.

Mr Cairns said he was torn between both "camps" as there was no doubt a new building was needed and the council had to be a "master of its own destiny".

However, he supported Cr Brown's motion to look at alternatives as he had "real concerns" about "cost containment" with the waterfront project.