The chicks are believed to have wandered away from their nest. Photo: Orokonui Ecosanctuary
Two rare takahe chicks at Orokonui are casualties of last week's floods. 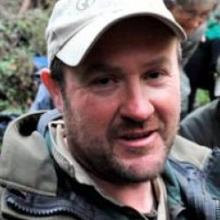 The ecosanctuary near Dunedin announced today the newly-born chicks of the park's only pair of birds, Quammen and Paku, died from exposure after wandering from their nest when it began raining on Tuesday last week.

The chicks were born within the past fortnight.

Orokonui conservation manager Elton Smith said it was "sad'', but he was being pragmatic.

There are about 350 of the flightless New Zealand native birds in the world.

"It's just one of those things. The weather is something you can't control", Mr Smith said.

"I mean it's disappointing on a number of levels and the loss of two chicks for people to view is one of them.''

There was hope the pair could soon re-nest again, he said.

"If they don't this season, they will next season.''

The first chick was found dead in wet grass following the floods.

The second was never found, but staff could tell by the way its parents behaved that it was dead, he said.

"The day after that the parents were acting like they didn't have another chick to feed."

They likely died of hypothermia after being drenched.

The park's recovery strategy through the Department of Conservation was of "non-interference'', he said.

"So people may ask 'why didn't you cover them', but we have to leave them to their own devices.''

There would have been some loss of other animals, but "nothing obvious''.

It would not have strongly impacted the overall recovery programme for the birds, as probably "a dozen'' were lost every year, he said.