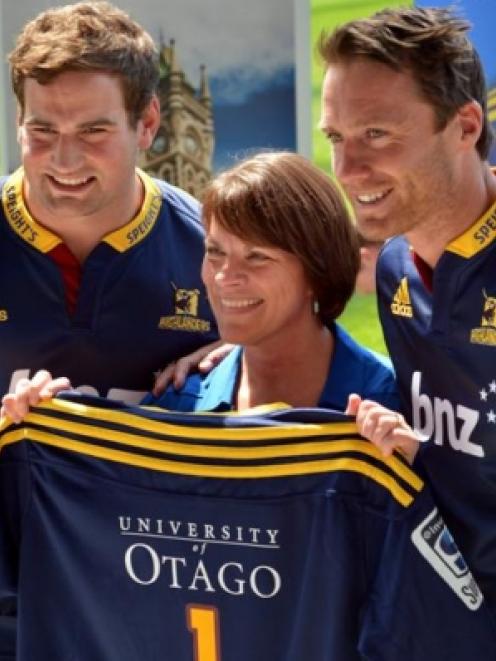 The agreement, aimed at increasing the university's global exposure, means its name will be printed on the back of Highlanders' jerseys, on medics' bibs, and its logo painted on the Forsyth Barr Stadium field and put on digital signage during home games.

University television advertisements will also play at the stadium during intervals, and players will be involved in university events and academic initiatives.

The arrangement has come under attack from the Tertiary Education Union (TEU), which said the university should be spending taxpayer money on students and not advertising.

Vice-chancellor Harlene Hayne, speaking at an event at the stadium attended by Highlanders players and team and university management yesterday, would not specify how much the agreement was worth, saying it was ''commercially sensitive''.

However, she was enthusiastic about the contract, saying it represented good value for money.

''During home games at the stadium, the international television broadcasting of the matches will be powerful brand exposure for traditional signage and our crest, which will soon be painted on the grass,'' Prof Hayne said.

''During games at other stadiums in New Zealand and other parts of the world, the university's name on the Highlanders' jersey will be visible to more than a quarter of a million viewers per game.''

The sponsorship was also about supporting the stadium, which she called a ''world-class facility''.

''The university has a commitment to the stadium, which we use for university events, including student Orientation, and it's a safe ... short walk from flats and colleges.''

The Highlanders' on-field performance would not form part of a decision whether to renew the sponsorship after two years.

''On the face of it, some might think that we represent very different organisations, but the university and the Highlanders have a number of very important values in common,'' Prof Hayne said.

Some of the ''country's best'' rugby players in recent times, including Anton Oliver, Adam Thomson and James Ryan, had studied at the university, and co-captain Ben Smith was studying towards a physical education degree.

Mr Clark said the Highlanders took advantage of university expertise, including in the areas of marketing, medicine and strength and conditioning, to help the team ''compete against some of the best teams in the world''.

TEU deputy secretary Nanette Cormack was critical of the deal, saying it ''better not come at the expense of public education and research''.

''We do not know how much the university will spend promoting itself to rugby fans, but we do believe that money the public gives to public education institutions should be spent on public education and research, not on advertising,'' she said.

''It should be investing in keeping student fees down, lowering class sizes or bringing high-quality research and teaching to the people of Otago.''

Sponsoring a sports team could be ''very effective'' as Southern Institute of Technology had found with its sponsorship of the Southland rugby team, Prof Davies said.