Otago's oldest school is about to become New Zealand's newest school - if only for a short time - after being given $10.9million for a rebuild.

Arthur Street School principal Kim Blackwood said the board of trustees at the 171-year-old Dunedin school had been working with the Ministry of Education for several years to get the funding, and the complete rebuild was "long overdue''.

"To finally get it across the line, it's incredibly exciting.''

She said the build would be completed in two stages so the school could continue to run during construction.

The junior block would be demolished and rebuilt first, and the pupils would be ``juggled'' around the remaining part of the school. 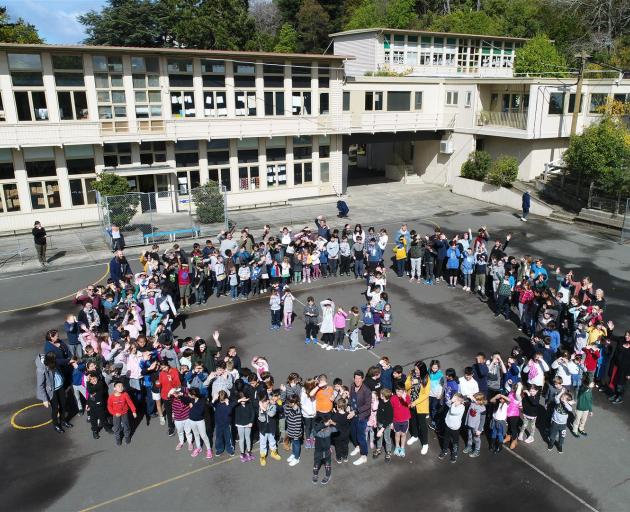 Arthur Street School pupils celebrate after learning their school has received $10.9 million from the Government for a complete rebuild. PHOTO: STEPHEN JAQUIERY

Once the new junior block was completed, the pupils would move in and the senior block and staff rooms would be demolished and rebuilt, she said.

"We had some Portacom [portable, temporary] buildings brought in earlier in the year and so we'll use those as well.

Board chairman Darryl Sycamore hoped the new blocks would be situated against the boundaries, to create more open space for outdoor activities, improve access and maximise sunlight.

Construction is expected to begin in 2021 and could take up to five years.

Ms Blackwood said the Dunedin school had a unique history.

It started on board the Philip Laing in 1847, where the children of Scottish immigrants were taught by school teacher James Blackie on the voyage to Dunedin.

On arrival in 1848, the school was transferred to a waterfront site near the foot of Dowling St, where it was known as Beach School.

In 1864, the school shifted to the corner of Tennyson St and York Pl, and was renamed Middle School.

And in 1877, it was shifted to its present site and called Arthur Street School.

The school had a major redevelopment in 1960, but some original buildings remain - including the school hall and the infant building.

Ms Blackwood said the infant primary building was the oldest structure on the site.

It was built in 1877 and up until last year, it was still being used as the school's library.

"They built them good in those days. And to be fair, the structure itself is still very sound.

"It's just the slate roof that's let it down over time. It's starting to leak.''

She said it was catagorised as an historic building in Dunedin, and the board was now investigating how it could be preserved.

"That part is not going to be demolished. It's going to be looked after by Heritage New Zealand.''