Out of the netherworld, into the gym 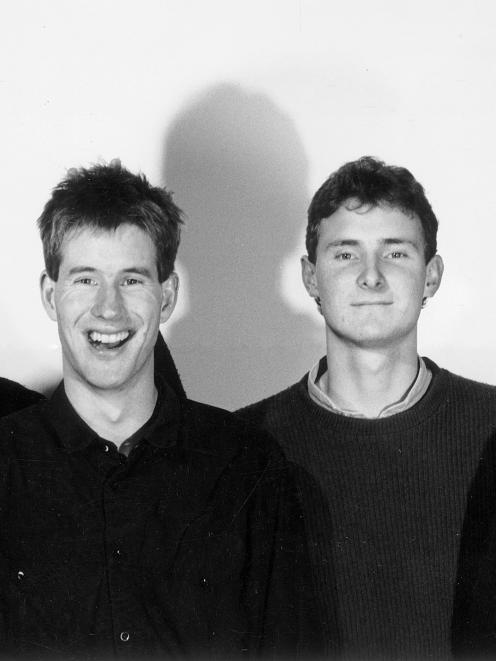 Then and now: Malcolm Black (left, and above, second from left) with his Netherworld Dancing Toys bandmates Nick Simpson, Brent Alexander and Graham Cockroft. Photo supplied.
Picture this: Malcolm Black walks into Eden Park during last year's Rugby World Cup and tens of thousands of rugby fans celebrate an All Blacks try by singing: "For today, I remember your smile".

The 51-year-old said it was a great feeling to hear the mass sing-along of hit single For Today, from the now defunct Dunedin band Netherworld Dancing Toys.

"I am very proud of it, and it is nice to have made something that has lasted well and it has become part of the New Zealand cultural scene."

The journey to having a hit single, platinum album, music awards and a successful career in entertainment began in Dunedin.

Growing up in Waverley, he attended Bayfield High School before studying law and commerce at the University of Otago.

In bands from his early teens he played the Dunedin pub circuit before being asked to join the Netherworld Dancing Toys who were looking for a guitarist and another singer.

Joining the band in his second year at university, the group started playing a mix of covers and originals with their first record released on Flying Nun, but "was almost the antithesis" of the emerging Dunedin Sound.

"We liked high energy dance music ... we were very commercial and prided ourselves on big production and lights."

Mr Black said the seven or eight-piece band - complete with horn section - was in part influenced by the British group Dexys Midnight Runners, of Come On Eileen fame and "had almost no ambition".

However the release of For Today which climbed to No 3 in the New Zealand charts in 1985 resulted in the band cleaning up at the music awards that year, before calling it quits just a year later.

While they did make a second record several years later "it was a half-hearted attempt".

The song For Today had been largely kept alive by the band's relaxed nature regarding its use, as it had appeared in films, on television, in compilations - or "played at the rugby".

After graduation he took a job at Russell McVeagh working as an entertainment lawyer for several years, and later travelling overseas before he returned to Dunedin as an assistant law lecturer.

"In retrospect I probably came back a little bit early," he said of the three-year stint.

During that time he assisted some of the city's prominent Flying Nun bands, including The Verlaines and The Chills, which were attracting considerable interest overseas.

He later took a job with Sony, working with artists such as Bic Runga, Brooke Fraser, Dave Dobbyn, Che Fu and Dimmer.

While the music industry was performing well, the "cloud on the horizon - which was digital" was handled poorly by many companies, he said.

From Sony he was approached by Les Mills to solve their music licensing problems as "they had to get their heads around how they could use this music legally".

The company was now the "biggest company in the world at group exercise", with about 15,000 clubs and 100,000 licensed clubs instructors, and catered for an estimated four million people each week.

In the past three years he has been approached by Neil Finn to mange the internationally recognised artist via the company Meniscus Media, which he formed with Mike Bradshaw.

"[Neil Finn] really has been the only truly successful artist, which says something about New Zealand, maybe."

Mr Black said he returns to Dunedin frequently to visit his family, and also has a house in Queenstown where he spends the winter months to work and ski.

He said he loved returning to Dunedin and "I intend to be back, but to be honest I have been saying that for the last 20 years".

The size of the city and the fact many of the citizens chose to live there for reasons other than money was appealing - "the whole vibe is different".

"I look at the university and the museum, the art gallery and the film society as examples down there, which can give you a really rich cultural life which isn't commercially driven."

On the family front, he had two older daughters Ruby (20) and Awhina (17), and with his new wife Julia was expecting a baby on October 19, coinciding with his eldest daughter's 21st birthday"I am looking forward to it," he said.