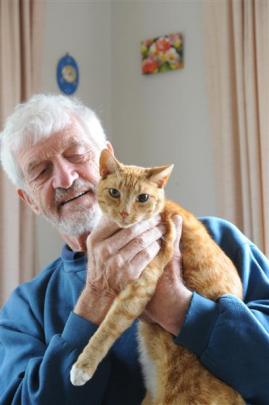 Retired Mosgiel resident Dave Radley wants to know why somebody shot his cat, Reddy, blinding him in one eye. Photo by Linda Robertson. 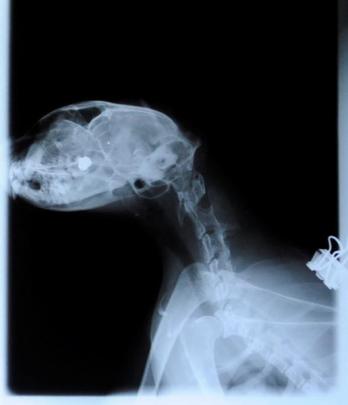 An X-ray showing the slug lodged permanently in the cat's head.

An elderly Mosgiel man wants to know why somebody would shoot his beloved cat, leaving him blind in one eye. Dave Radley (76), who adopted Reddy, a 7-year-old ginger tomcat, from the Otago SPCA when he was a kitten, said he had lived alone with Reddy since his wife, Betty, moved to a Mosgiel rest-home.

He found Reddy on his driveway last Thursday with a bloody face and his eyes ''rolled inside'' his head. An X-ray revealed an air rifle slug had entered the left side of Reddy's head and was lodged under his right eye, he said.

Mr Radley and his wife were upset and prepared themselves for the possibility Reddy might have to be put down.

However, Reddy was ready to return home on Saturday, with the slug still in his head because it was too close to his brain to be safely removed, Mr Radley said. As a result, Reddy was blind in his left eye, he struggled to jump and was quieter, Mr Radley said.

Reddy rarely strayed from the property, so Mr Radley suspected somebody shot the cat from the road. He wanted to ask the person who fired the air rifle a couple of questions.

''I'd like them to tell me why and what they have gained.''

Saddle Hill Vet owner Jon Hepburn said it was ''disturbing'' someone would fire a slug at a cat.

''It was only millimetres away from dying.''

Reddy is not the only cat to have been shot in Mosgiel. Mosgiel Veterinary Services veterinarian Verona Mitchell said a female cat was shot there just after Christmas.

The cat was hit by a .22 calibre slug, which entered the ''right flank'' and lodged in the animal's abdomen. The cat died three days later, Ms Mitchell said.

Detective Sergeant Neil Lowden, of Mosgiel, said anyone shooting an animal with an air rifle could be charged with animal cruelty.

He urged anybody with information on the cat shootings to contact Mosgiel police.