Parking put aside for now as cycle lane idea proceeds 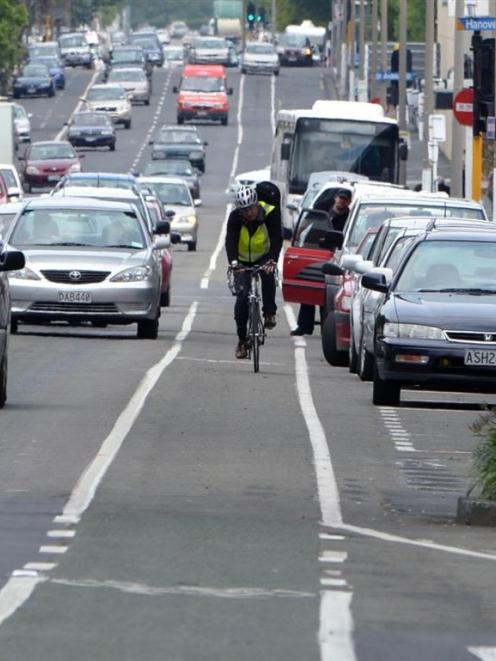 A cyclist utilising a Dunedin cycle lane. Photo by Stephen Jaquiery.
Concerns about the loss of parking from a separated cycle facility in central Dunedin are a ''red herring'', Dunedin Mayor Dave Cull says.

Installing a cycle lane on one side of the one-way system through the city was about safety, he said.

''The issue of losing parking is a complete red herring. Roads are for moving people along. Parking is a bonus.''

He was responding in part to comments from Cr Lee Vandervis, who led a discussion on a report to yesterday's full council meeting on the New Zealand Transport Agency (NZTA) recommendation to install separated cycle lanes on State Highway 1 through the city.

Cr Vandervis raised concerns about whether such a lane was actually safer, because he was told the intersections were the most dangerous parts of the road.

The agency was seeking approval to start consultation on two options: either a one-way separated cycle lane on the right side of each one-way section between Rattray St and the botanic garden - the safest option - or a two-way cycle lane along the length of Cumberland St.

The NZTA would pay for the work.

Cr Vandervis asked why the number of parks likely to be lost was not in the report, and how much revenue the council would lose from them.

NZTA project manager Simon Underwood conceded it was an omission but said it was very early to be talking about loss of parking, given no consultation had taken place and they were still trying to work out exactly what people wanted.

He said the research showed the separated lanes were safer than simple painted lines on the road.

However, people were expected to park elsewhere, so the DCC would pick up that income from replacement paid parking in the vicinity.

Cr Andrew Noone also thought the discussion about the loss of parking was a bit premature.

''My understanding is that ... if we do lose parking, and it sounds like it's probably a fait accompli, there will be adjustments, but I think we need to have that discussion after consultation, when there is a firm option and we can work on alternatives to absorb parking demand.''

Cr Jinty MacTavish said she was very happy with the NZTA's proposals, but sought reassurance short-term improvements would continue until the project was realised, at the earliest in three to four years' time.

But Cr Vandervis said losing the income from at least 200 parks and forcing people further out for parking was a ''lose, lose, lose''.

''I'm going to be voting against the whole lot. It makes no sense at all.''

Cr Chris Staynes said Dunedin had a ''terrible fascination'' for car parks, and this sort of project made the city safer and was an opportunity to make it an even greater place to live.

Cr Richard Thomson recalled that when parking was removed for trees to be planted in George St, ''that was going to be the end of civilisation as we know it, yet it's still operating as a retail street and it is much more attractive''.

A cheer went up from the dozen people who had gathered in the public gallery for the debate when most of the councillors voted to support the NZTA beginning consultation. Cr Neil Collins and Cr Vandervis voted against it.