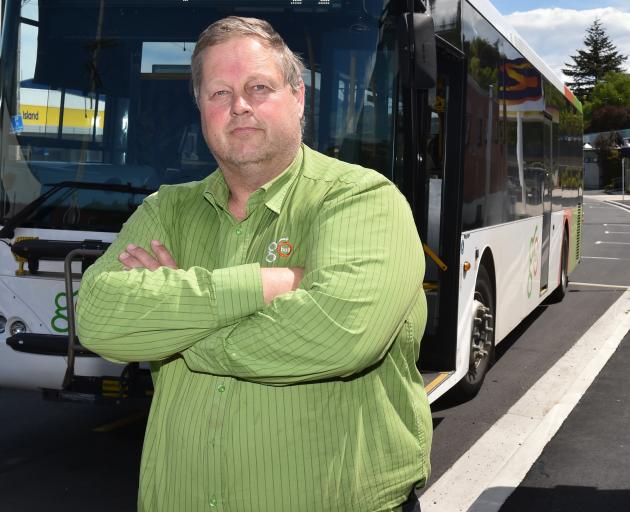 Dunedin Tramways Union secretary Philip Matthews: "It has been over a year of fighting and protesting ... we are still waiting.’’ Photo: ODT files
Bus drivers are upset they are still waiting to be paid a wage increase promised to them a year ago.

It has been a bumpy ride for Dunedin and Queenstown Orbus bus drivers.

A commitment to pay them the living wage of $22.10 an hour was made in July last year, following campaigns by Tramways Union and First Union.

In April this year, frustrated drivers attended an Otago Regional Council meeting, demanding to know where their pay rise was.

It resulted in what some bus drivers called a ‘‘hollow’’ victory in May, when the council committed to back-pay drivers to July last year, but still did not provide a date on when the increase or back pay might be made.

‘‘It has been over a year of fighting and protesting ... we are still waiting.’’

Meanwhile, council transport manager Garry Maloney said ‘‘significant’’ progress had been made on rolling out the living wage to drivers.

Mr Matthews said drivers expected to wait some time for the back pay, but thought the hourly rate increase would have happened by now.

‘‘[The drivers] look up their pay slips and think, ‘It is still not here’ and they do get a bit upset.

‘‘Bus drivers deserve the increase - they sometimes get a hard time - it is not as easy as people think it is,’’ he said.

The living wage is voluntary. It is not the same as the minimum wage.

Mr Maloney yesterday could not provide a date as to when drivers would start receiving the increased wage, but said the council had been been working with operators to determine the cost of back-paying drivers to July.

‘‘There are a number of complexities involved, including departed staff, KiwiSaver, taxes, and accounting for various forms of leave, which has unfortunately made it a lengthy process.’’

Once the costs were audited and agreed, operators would be able to invoice the regional council at the new rates and pay drivers the increased wage, he said.

Quote: "Meanwhile, council transport manager Garry Maloney said ‘‘significant’’ progress had been made on rolling out the living wage to drivers."
My good god, what a load of drivel. Sounds to me that the simple process of paying the 'living wage' has no priority at all. In fact, it seems to me the process has been made as complicated as possible, (seat warmers are profoundly efficient at that)...followed by cup cakes, high tea and a rather large and jolly dollop of procrastination. Maybe Mr Maloney could drive a bus on Dunedin's tightest streets and peak hour traffic as an 'undercover boss' for a week on less than $20 an hour.....that might 'inspire' him to act a little more swiftly. A year in the waiting after agreeing to the deal? are you kidding me? And you want more people using public transport? Maybe the Mayor could get involved? Surely he has some concern at such low pay? Maybe he could drive a bus for a week and experience what these drivers tolerate on minimum wage.....oh, that's right he has no licence at all....so he's not qualified to comment, but does he 'ride the bus'? Oh, that's right, he 'hitch hikes' at the expence of others......

Yet they are too lazy to turn a steering wheel to keep the back of the bus tucked in and block up arterial roads never traveling at speeds over 40kmh. Pull out like they own the road and drive metres over the centre line on blind corners. I've witnessed this on too many occasions.