Peaceful escape hanging out with gulls 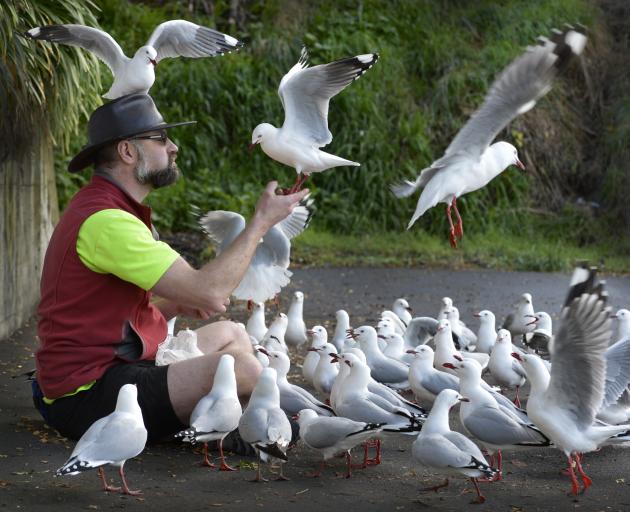 Tony Pemberton feeds his flock of friendly seagulls in Dunedin yesterday. Photo: Gerard O'Brien
A Dunedin man who finds peace in the company of seagulls has become an internet sensation.

Tony Pemberton, who works as a storeman at K-Mart, has been feeding seagulls in a car park in Filleul St for almost 20 years as a way of getting close to nature and escaping the ''concrete jungle''.

This week, his relationship with his sea-bird friends prompted a small sensation after a video of him walking with a seagull on his hat was posted on a social media page.

While many found noisy seagulls a nuisance, Mr Pemberton said he found peace hanging around with gulls, which trusted him enough to land on him and his wide-brimmed hat.

''One of the reasons I like animals is they are simpler to understand [than people].''

He started working for K-Mart in 1998 and every day came out to feed the birds.

''This is my escape from the concrete jungle . I come out under the trees, in the sunshine hopefully, and the birds come down to share my lunch.''

He believed they were smarter creatures than people gave them credit for.

They waited on the top of nearby buildings for him to have lunch each day and quickly picked up when his shift changed.

In 19 years, he had learnt a little bit about their behaviour.

''There are the teenagers who try to boss each other around strutting around like guys in cars in the Octagon on Friday nights. Until one of the older birds put them in their place.''

In spring, things got pretty rough as males fought for mates.

Then there were the black backs, which were more cautious and much more territorial.

It took young birds a ''couple of months'' to get used to his company and feel brave enough to land on him.

He did not mind the attention going viral on the web.

''I suppose if it worried me I wouldn't be doing this in public.''

He mostly got a positive reaction from people, but some passers-by were afraid of the birds.

''They'll be coming down to land on me, but [the passers-by] will be ducking and diving.''

Surprisingly, bird poo was not much of a problem as he was protected by his hat.