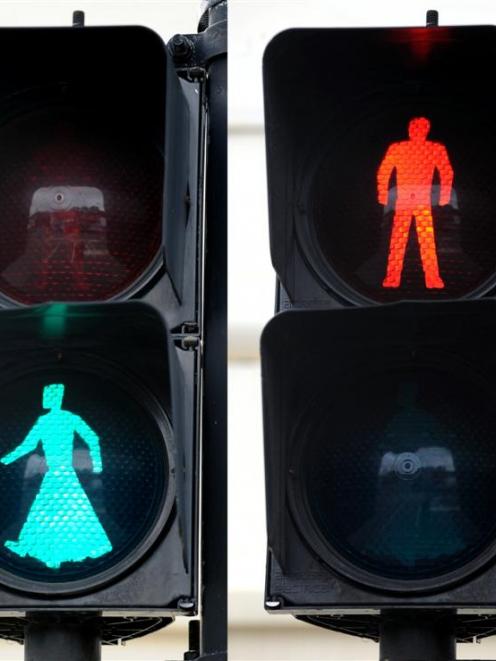 The modified pedestrian crossing signal at the corner of Manse and High Sts, Dunedin. Photo by Stephen Jaquiery.
She has been quietly ushering pedestrians across High St to Manse St for nigh on two years, but the questionable gender of one of Dunedin's pedestrian signals has finally come to light.

Just who modified the crossing signal to develop the jaunty looking green lady - or gentleman with an unusual dress sense - is unknown.

But Kew resident Michael Broad, who drew attention to the matter, had his own views, putting it down to a contractor with an artistic bent scraping out a skirt during a bulb change.

Mr Broad also thought it could be a great asset to the city, and has written to Mayor Peter Chin, describing the fixture as "an amazing success".

"So without any further delay, there must be decisive action to carry forward the idea right throughout the system," he told Mr Chin.

"I envisage an equal number of male and female lights at opposite sides of each intersection, which will be a wonderful addition to our tourist attractions.

I have not so far located any town or city with such an amenity anywhere.

"There is absolutely no time left to procrastinate; if Christchurch heard a whisper we would be left on the back foot, while of course Tim Shadbolt would be in like a shot.

"We cannot afford that."

Mr Chin replied, but appeared less than convinced about the idea, suggesting the green man on the signal was in fact a "green person".

"Maybe the forethought of the unisex symbol was already there when it was originally developed?"Mr Chin said any change needed to be raised with the New Zealand Transport Authority.

That response has not stopped Mr Broad, who has now appealed to the three female city councillors, Fliss Butcher, Kate Wilson and Teresa Stevenson.

"The mayor turned down my request for what I regard a trivial reason, so I have put in operation 'Plan B', which is asking our three female councillors to assist."

Cr Butcher gave her support, referring the matter to the newspaper, and Cr Wilson said the predominance of kilts in Dunedin, not to mention Mr Chin's predilection for wearing wedding dresses, made the be-skirted signal a good fit for the city.