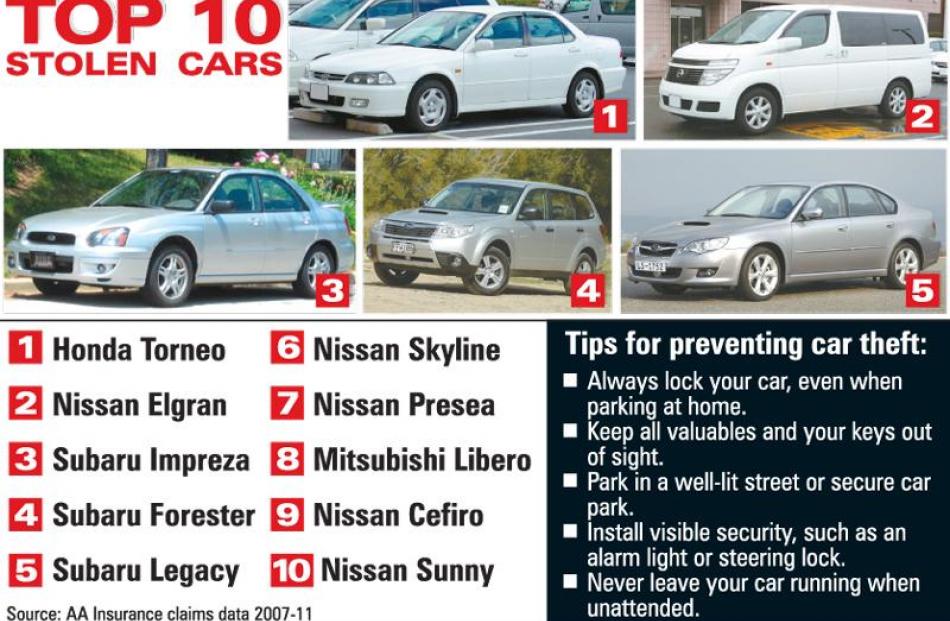 It may not be slick, or all that quick, but the Nissan Elgrand is capable of transporting up to 10 people at once, and car thieves love it.

The popular people mover was second on AA Insurance's list of the top 10 cars stolen in New Zealand, behind the sportier Honda Torneo.

But do not fear: Elgrands in Otago are 28% less likely to be stolen than those in Auckland.

The company's list, based on car theft claims over the last four years, revealed the most frequently stolen cars and the regions from which they were likely to be stolen.

Auckland had the highest rate of car thefts, followed by Canterbury, Wellington and Waikato.

AA Insurance head of operations Martin Fox, while "surprised" by Otago's placement, because it was a "reasonably big, central student type location", believed it all came down to size.

"If there are repeat offenders anywhere, it's a bit like you fish where the fish are."

With more drivers parking on the street and in the CBD in Auckland, it made sense there were more car thefts there.

"If you live in Dunedin, or the outskirts, you are in a pretty safe place," Mr Fox said.

He recommended people use security devices, such as steering wheel locks and alarms, and park cars off the street.

"The message is 'start taking a little bit more care with your possessions, especially with certain types of car'."

Thieves were "consistently targeting" cars which were 10 years old, with an average cost of $5101, because newer cars had more sophisticated security systems, and older ones were easier to modify.

"They are focusing on the cars that can be made to look really street smart. These cars are more attractive because they are highly in demand, so if you steal them, there is a ready market for them," Mr Fox said.

Stealing for parts was also common as the types of cars stolen were driven "hard" so parts were worn out quickly and became "pretty attractive".

"Unfortunately, there are people in the world who don't mind depriving people of their possessions to get what they want."

However, one aspect of the top 10 list which "made us smile", was having a people mover make it on for the first time.

"There is a trend towards people buying these larger vehicles. They are reasonably good economically and they offer so many options," he said.