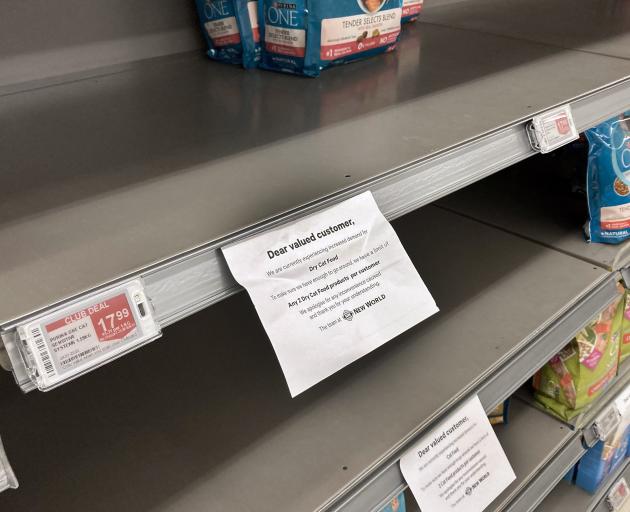 Pet food was among the items targeted at supermarkets. Photo: Stephen Jaquiery
Toilet paper has been wiped out at some Dunedin supermarkets, despite retailers encouraging consumers to avoid panic-buying after new Covid-19 restrictions came into force.

Stocks of rice and tissues were short, and a number of other items were restricted, including cat food.

Pak’nSave South Dunedin had sold out of paracetamol and had implemented item limits on cold and flu products.

John Moyle, of Fresh Choice Green Island, said his store had experienced a roughly 30% increase in demand on Sunday, after Prime Minister Jacinda Ardern announced New Zealand was to move to the Red setting on the Covid-19 traffic light system. 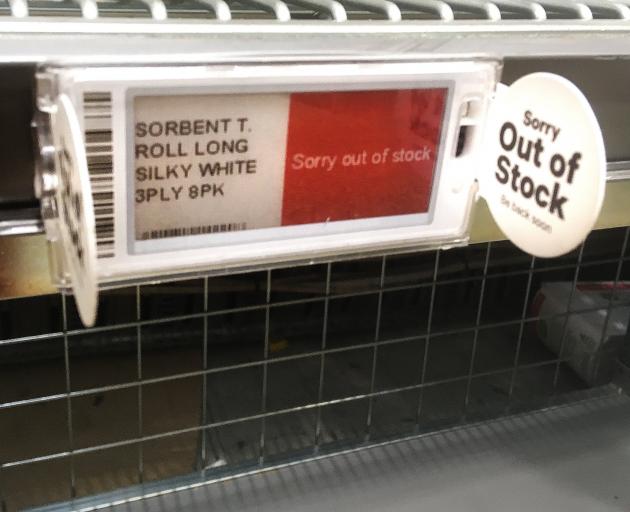 Stocks are down ... Signs on shelves at Pak’nSave in South Dunedin yesterday.PHOTOS: CHRISTINE O’CONNOR

Mr Moyle said supermarkets were well prepared and customers should shop normally so temporary shortages could be avoided.

Toilet paper and bread were especially affected by the surge, Mr Moyle said, but the shift to the Red light setting had resulted in fewer consumers stocking up than had occurred during last year’s lockdowns.

Supply chains had been shown to be operate ‘‘reasonably well’’ even when placed under pressure by Covid-19 related disruption, and the traffic light system would mean less disruption to business-as-usual compared to a lockdown.

There might be some disruption as staff got sick, but there was ‘‘plenty of product’’, he said. 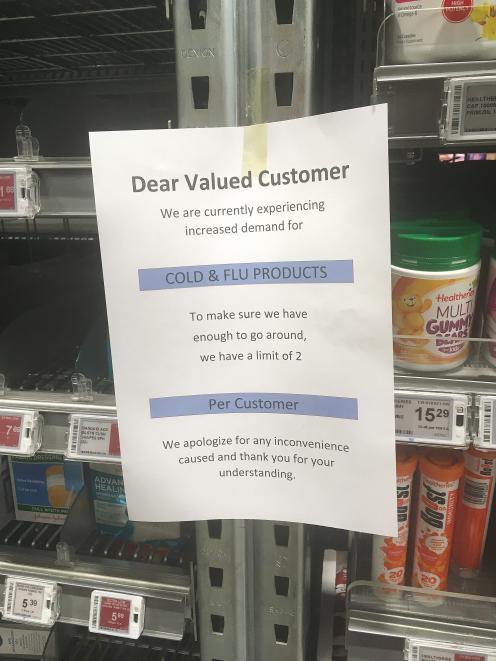 Foodstuffs corporate affairs manager Emma Wooster said there had been a concerted effort to actively prepare for Omicron and there was no need for consumers to stock up, even if preparing to self-isolate.

Consumers should make an effort to shop safely by scanning in, wearing masks, social distancing and nominating one person from each household to shop in store.

Shoppers should treat staff and other customers with kindness, she said.

Pharmacist Paul Larson, of Green Island, said that he was on the verge of selling out of his current stock of KN95 masks, and staff had administered more than 100 vaccinations.

Other pharmacies spoken to by the Otago Daily Times were also extremely busy providing vaccinations, but none had faced any shortages of medications.

No words can describe the idiots who do this time after time.