The comforting presence of a pint-sized pony could help people in trying times.

Kimberley Tahana, of Dunedin, has ridden horses all her life, and was one of the "Riders of Rohan" in the The Lord of the Rings film trilogy.

"With horses there is definitely a connection with people."

She has established Wairua Therapy Ponies as a not-for-profit organisation and plans to share her love of horses by offering her Shetland pony Willow and oversize miniature pony Sooty as therapy animals.

"Horses have a very therapeutic, gentle side to them." 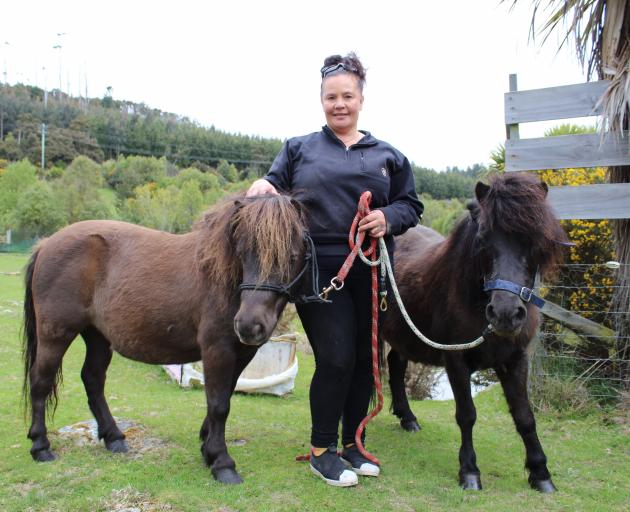 Wairua Therapy Ponies founder Kimberley Tahana, of Dunedin, says her ponies Willow (7, left) and Sooty (17) are a calming presence. PHOTO: SIMON HENDERSON
Therapy animals were a way to bring light into some people’s lives, she said.

She was exploring funding options so she could offer the service for free, Ms Tahana said.

"I don’t want there to be a cost for anybody."

The ponies had benefits for palliative care, children and people with disabilities or mental health challenges, she said.

Her time as a support worker as well as experiences in her family were some of the reasons she wanted to help others.

Her son, William, was on the autism spectrum and attended classes at Bayfield High School’s learning support centre for pupils with special education needs or disabilities.

As a trial run of her therapy animal project she took the mares to see William and his classmates last year.

"That was an amazing day - they were loved."

Seventeen-year-old Sooty was "quite sensitive", and was used to being around people through being at pony shows and clubs.

Seven-year-old Willow was an "amazing, cuddly pony - she would just love to put her head in someone’s lap".

The ponies were "incredibly sensitive".

"You don’t have to say anything, you just have to pat them," Ms Tahana said.