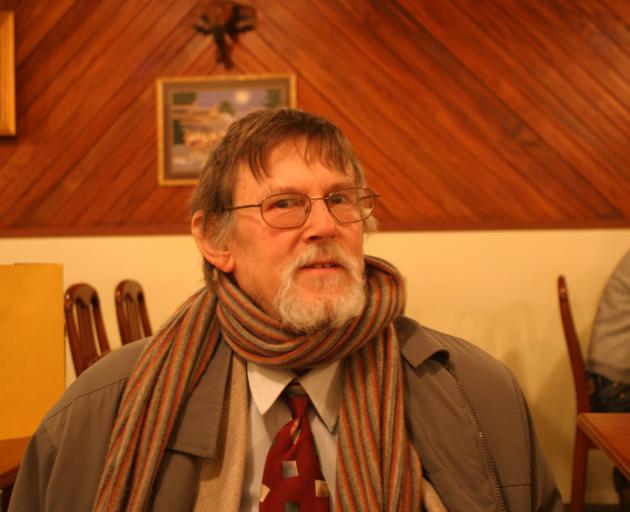 Prof Wes Sandle was a leading light in the field of laser physics. PHOTO: SUPPLIED
Wes Sandle was a pioneer in New Zealand in laser physics and laser spectroscopy, admired for his intellect and vision and warmly remembered by his colleagues and research students for his unwavering generosity, support and friendship.

He died in Dunedin on February 19 after a period of ill health.

Prof Sandle earned international respect in the atomic physics and laser community, and was influential to a young generation of Australian physicists in this field.

Bringing a deep insight to physical problems, and the drive to keep abreast of major new directions, he carried out his research with passion and rigour.

He had great enthusiasm for physics and science in general and made influential contributions to several innovations in energy efficiency and energy management in New Zealand.

Weston James Sandle was born in Christchurch on March 19, 1935. Growing up in New Brighton, his youth was characterised principally by his scholastic achievements and his aptitude for sport.

He attended New Brighton Normal School, where he was not only the brightest pupil but also the fastest runner. He went on to Christchurch Boys’ High School in 1949, leaving after the lower sixth in 1952, having won a New Zealand National Scholarship.

Thus armed, he began studying at Canterbury College (University of New Zealand) in 1953. After finishing a BSc, he was awarded the George Grey Memorial prize and completed an MSc with first class honours in mathematics in 1957.

In 1958, he was awarded a King George VI Memorial Fellowship supporting postgraduate study abroad, and he entered the PhD programme in physics at Berkeley, University of California.

His time in California had a profound influence on both his professional and personal life. The Berkeley physics department had many outstanding professors, including household names such as Edward Teller, and Wes was inspired by their elegant approach to physics.

He chose to work on the application of NMR to solid-state physics under the supervision of Alan Portis. In the summer of 1963, Wes met Pat Tisdel from Colorado, whom he married three months later in Berkeley. Together, they raised two children, Alison and Tony.

Newly married and with graduate funding running out, Wes made the decision to suspend his PhD study in 1963 and accept the position of lecturer in physics at the University of Otago, which was then undergoing a period of reinvigoration.

His interests aligned most strongly with Jack Dodd’s atomic physics group, and he enthusiastically joined their research programme on quantum beats in resonance fluorescence. At that time, the range of atomic species and transitions accessible to their experimental techniques was limited. Wes, using insights from his solid-state background, developed a novel experimental approach employing pulsed magnetic fields, which significantly widened that range.

Together with a series of graduate students, he took a lead role in the first demonstrations of quantum beats induced by pulsed magnetic and electric fields and their application to the measurement of atomic coherence and collision lifetimes.

In the meantime, his PhD thesis remained incomplete, but in 1968, as the final cut-off date loomed, Wes entered into a period of solitary and intense activity, emerging after three months with a completed thesis.

His ability to sustain periods of strenuous intellectual activity under severe time pressures became familiar to his colleagues over his career.

Wes continued working in traditional atomic spectroscopy into the 1970s, publishing jointly with his graduate students and colleagues, but the advent of tunable dye lasers ushered in a paradigm change for atomic physics.

He took a major leap in 1972, establishing New Zealand’s first laser physics group, which he led until his retirement in 2001, and achieved international recognition.

With input from Dan Walls at Waikato University, Wes chose to work in the area of nonlinear optical effects in atomic vapours. His experimental results in optical bistability and polarisation switching beginning in 1978 received international attention.

Further work followed in self-focusing, and spatial pattern formation of laser beams, and switching dynamics in Raman lasing. He established a significant international profile in the field, and built up the Otago group by obtaining funding for a modern laser laboratory, and attracting postdoctoral fellows and graduate students.

In 1985, he was a visiting fellow at JILA, University of Colorado and a guest scientist at the Max Planck Institute for Quantum Optics in Garching. He served on the programme committee for the International Quantum Electronics Conference (IQEC) from 1988 to 1994 and was a foundation member of the Australasian Council on Quantum Electronics, serving from 1988 to 1996.

Also, in 1998, he served as chairman for the Australasian Conference on Lasers, Optics and Spectroscopy (ACOLS), which he brought to New Zealand for the first time.

Wes was motivated by the oil crises of the 1970s to become actively involved in a number of technological innovations relevant to energy issues in New Zealand.

Starting in 1977, he chaired the Energy Subcommittee of Ecology Action (Otago) which made a notable submission, “What, Nuclear Power in New Zealand?”, to the Royal Commission on Nuclear Power Generation in New Zealand (1978). The Commission reported that “the use of heat pumps was strongly advocated in the Ecology Action (Otago) submission” for providing home heating with improved energy efficiency.

Decades later, Wes was pleased to witness the potential of heat pumps being realised, as they became widely used in New Zealand homes, driven by reduced costs, improved efficiency and the rising price of alternatives.

During the period 1979-85, Wes supported Gerry Carrington to secure funding from the New Zealand Energy Research and Development Committee to demonstrate the application of heat pumps for domestic space and water heating and for industrial applications.

He also had an active role in the development of improved energy management processes and technologies for the University of Otago, with early initiatives achieving pay-back times of less than five months. Once this programme was established, it was entrusted to an independent Energy Management unit that was subsequently commercialised to become New Zealand’s most prominent firm in this field for many years.

In the late 1980s, Wes undertook another major change in research direction, pioneering laser cooling in New Zealand. The Otago group was thus well positioned for the huge upsurge of interest in cold atom physics that followed the creation of an atomic Bose-Einstein condensate in 1995.

Wes embraced the formidable challenges of creating a condensate in New Zealand, and together with Andrew Wilson, he initiated the Otago experimental programme on cold atoms and Bose-Einstein condensation. Andrew led the laboratory team, and Wes had a major role in obtaining funding, and providing supportive mentoring and guidance.

In 1998, the team produced the first condensate outside a small handful of US and European labs. This success placed the Otago group firmly on the international map and laid the foundations for the current high-profile atomic physics group at Otago that has had a central role in the formation and success of the Dodd-Walls national Centre for Research Excellence.

Wes was a collegial and loyal staff member of the University of Otago and chaired the physics department from 1993 until 1996. He was very committed to his teaching, and an enthusiastic and colourful lecturer who could transmit that enthusiasm and motivate students.

He was a strong supporter of the New Zealand Institute of Physics, being a fellow from 1983, and served in a number of roles, including council member from 1990 and president from 1996 to 1998.

He became a fellow of the Royal Society of New Zealand in 1998, and in 2004 was appointed an Officer of the New Zealand Order of Merit, for services to science.

In retirement, Wes served on both the Otago University Chaplaincy Trust Board and the Hearing Association.He was passionate about music, participating in several choirs. He continued to indulge his enduring love of technology, amassing an impressive collection of electric vehicles.

Even to those in Dunedin who had never heard of him, he was well known in his later years as “the elderly gent on the red electric trike”.

More broadly, Wes has created an enduring academic legacy through his published work, and through the careers of the students and colleagues that he mentored and encouraged throughout his life.