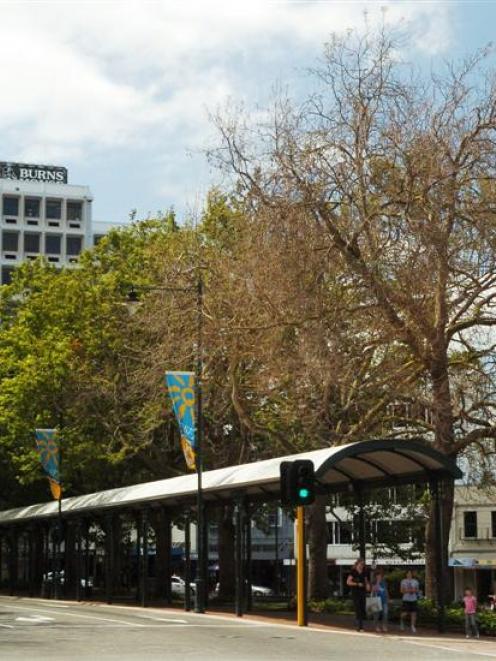 Turning part of Dunedin's Octagon into a car-free zone could be just the start of a wider push to make the central city more pedestrian-friendly, council staff say.

As councillors prepared to discuss the proposed trial of a vehicle-free lower Octagon and lower Stuart St again this afternoon, a staff report noted work was already under way that could eventually see other parts of the city following suit.

The report, by council acting urban design team leader Dr Glen Hazelton, said the council and its stakeholders were already working on a business case for a new central city accessibility and safety upgrade.

The upgrade was the highest priority project to emerge from the council's integrated transport strategy, completed last year, and aimed to address ''high levels of conflict'' between different types of road users, he said.

The upgrade would focus on ''increased pedestrian priority'' and new pedestrian facilities, including the possibility of other ''pedestrianisation options'' in the central city.''

Partial or full pedestrianisation of parts of the central city could be possible options,'' he said.

Dr Hazelton's report came after the idea of closing the lower Octagon and lower Stuart St - between the Octagon and Moray Pl - re-emerged during this year's budget deliberations.

University of Otago students Alexis Belton and Georgina Hampton made a joint submission calling for the concept to be trialled, prompting councillors to ask council staff to report back on options later this year.

The agency wanted councils to demonstrate how projects aligned with broader plans before funding was allocated, he said.

The council was therefore working to identify what improvements were needed across the central city, what the best solutions were for each, and how they ranked against other projects.

It was too soon to say whether pedestrianisation might be the preferred option in some areas, but it would be considered, alongside greater use of shared spaces, lower vehicle speed limits and other initiatives.''

We've gone through the problem definition phase. We haven't got to what are the solutions yet. That's the next phase.''

The report detailing options for a trial closure of the lower Octagon and lower Stuart St to vehicles might also suggest trialling the concept in another part of the city instead, as one option to be considered, Dr Hazelton said.

The council was also, together with the University of Otago, Otago Polytechnic and other parties, considering whether the area around the North Dunedin campus was suitable for new pedestrian zones.

Any new pedestrian-only zones or other physical changes were likely to be ''a few years away yet'', and required public consultation.

But, whatever the outcomes, Dr Hazelton predicted there was likely to be more debate on potential pedestrianisation options in the future.

''I think more and more we're going to see that - it will be about how you strike that balance between people and vehicles across the central city.''

Dr Hazelton's report, to be considered at today's planning and regulatory committee meeting, outlined the steps to be followed before a trial of the lower Octagon and lower Stuart St closure could be considered.

Any trial was not expected to begin until early next year, following a ''robust'' information gathering and consultation process.

''But it's still very much along the lines of if council does the trial, because there is ... lots of angsty views on it,'' he told the ODT.

The range of ''potential issues'' to be considered included the impact on cruise ship buses, access issues for people with disabilities and the loss of on-street parking, his report said.

Councillors would have their say on the trial's goals at a non-public workshop by the end of next month, before options were reported to the council by October 28.

A two-month public consultation period would follow, before councillors decided in January whether to proceed with a trial, which would - if approved - begin the following month, he said.