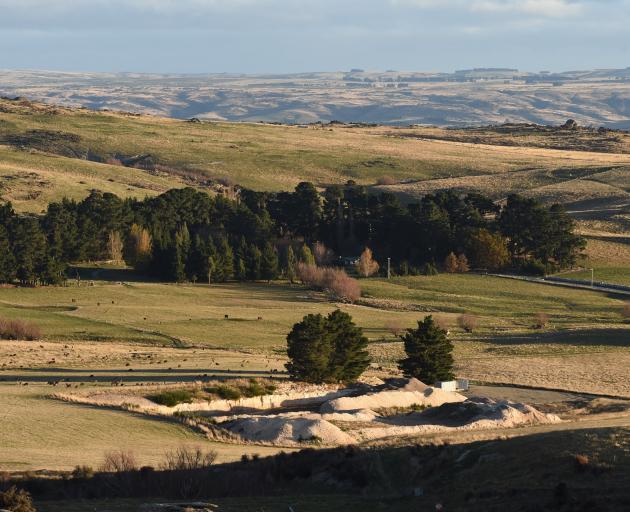 Foulden Maar, near Middlemarch. PHOTO: GREGOR RICHARDSON
The Government has been urged to acquire Foulden Maar - if necessary, under the Public Works Act - to protect its ancient fossils forever.

An earlier proposal to mine hundreds of thousands of tonnes of fossil-rich diatomite at the 23million-year-old site near Middlemarch to add to animal feed has been suspended after Australian mining company Plaman Resources went into receivership and liquidation earlier this week.

"The fact that the mine cannot continue puts the emphasis on how best to acquire the site in the public interest," he said.

In a submission last month to the Overseas Investment Office and to its two advising ministers, Conservation Minister Eugenie Sage and Associate Finance Minister David Clark, Sir Alan said that Plaman Resources had applied to buy further land, near its holding at Foulden Maar, in order to undertake mining.

He recommended the proposed purchase not be approved.

He also suggested "a recommendation and procedures be initiated for the New Zealand Government to acquire the Foulden Maar site, using the Public Works Act, if necessary, for the purpose of establishing a geological scientific reserve in order to protect the values of this site, in perpetuity, for appropriate geological/paleontological research".

In the submission, Sir Alan said he had previously visited the maar site as part of a group on a conducted scientific visit, and was "also familiar with several of the scientific publications on its amazing and unique macro and micro-fossil remains and its acknowledged scientific importance".

"To lose such an important fossil site would be a tragedy for New Zealand and the wider paleontological community," he said.

As well as Foulden Maar, near Middlemarch, the Hindon Maar complex, which comprised four related sites, several of them involving maars, was also of outstanding significance for its ancient fossils, she said.

She also believed other New Zealand regions had provided more protection for outstanding natural features than was the case in some parts of inland Otago.

"Otago is a diverse region with outstanding and unique natural landscapes and seascapes, water bodies and wetlands," Ms Gardner said.

"In particular, to avoid effects that would undermine the values that contribute to the landscape being outstanding."

Territorial authorities were required to give effect to these provisions, she said.

Prof Lee, of the University of Otago geology department, said the council's policy statements aimed to provide protection, but she wanted to have more proactive identification and listing of specific features to be protected.

She was keen to promote a community discussion, including about identifying more outstanding natural features.

The Geoscience Society of New Zealand had also added to the wider discussion by publishing this month an updated "best practice guide" to defining and identifying outstanding natural features.

The regional council and Otago's district councils should adopt and integrate this important publication into their respective planning approaches over outstanding natural features, she said.