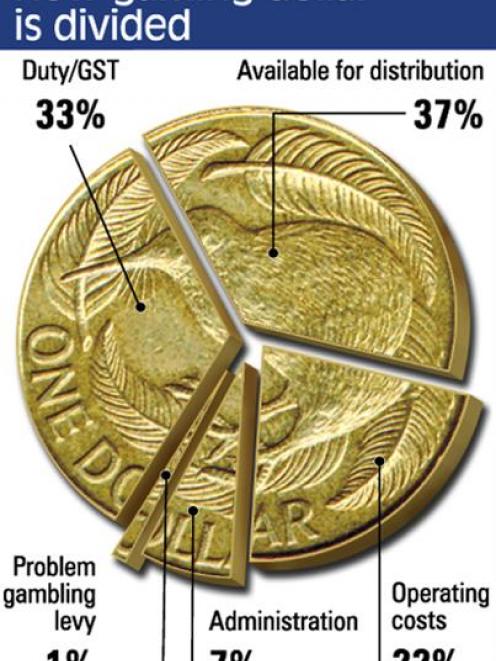 A pokies executive has slammed a claim that Otago would be $11 million better off if a controversial Bill handing the distribution of gaming cash to local government was introduced.

Pokie trusts would be stripped of their ability to distribute funds in favour of committees appointed by local councils under the Gambling (Gambling Harm Reduction) Amendment Bill.

According to 2010 Department of Internal Affairs (DIA) figures, pokie trusts returned an average of 41% of proceeds to Otago groups, but the new Bill would require 80% be returned.

However, Pub Charity chief executive Martin Cheer said: "You physically can't return 80% without going to jail ... because you would not be paying tax."

He said politicians were being "disingenuous by claiming that the Bill" would give communities the power to reduce or even eliminate machines while promising that it would more than double the current amount of community funding.

"They have a completely different set of priorities.

"I mean, there is not one of them that is not encumbered with massive amounts of debt, and they all have projects they want to fund," he said.

The Bill, which was supported by 85 votes to seven at its first reading in April, "should be called the Local Government Debt Reduction Bill", Mr Cheer said.

Donation recipients were overwhelmingly in favour of retaining the present system, and "they are seriously concerned about dealing with councils".

"They have no confidence in a local Government mechanism giving funds fairly and equitably."

Dunedin City Council communications and marketing manager Graham McKerracher said an internal working group had been looking at the proposed legislation and would meet this week to "discuss the city council's response to this Bill".

Council staff would consider the potential regulatory implications once public submissions to the select committee closed on Thursday, June 21.

Mr Cheer confirmed Pub Charity was using a "very small" amount of gaming machine money to fight the Bill, and justified the expenditure because "it is a critical issue for the future of the industry".

The Department of Internal Affairs had tried to gag trusts by saying they could not use community grant money for the purpose of fighting the Bill, he said.

A DIA letter, obtained by the ODT, shows trusts were urged to exercise good judgement and reminded them that net proceeds were not to be used for lobbying.

Mr Cheer said rorts involving pokies dealt with "money-losing enterprises trying to prop them up with gaming, but most of what council does loses money".

"This is a fundamentally a good model, and the bulk of it is carried out by rock-solid people, with the right motives and is very effective."

Concerns within the sector lay "squarely at the feet of the DIA, which had been ineffective in enforcing some of the exposed rorts".

"We want the ratbags out."

A few trusts had taken advantage in previous changes to the Gambling Act, and "they will continue to take advantage until someone is thrown in jail".

Karen Shea, of the Dunedin-based national trust, The Southern Trust, said the intent was good but the Bill was fundamentally flawed.

She said under the proposed Bill, councils would have to buy their own poker machines - estimated to be about $250 million across the country.