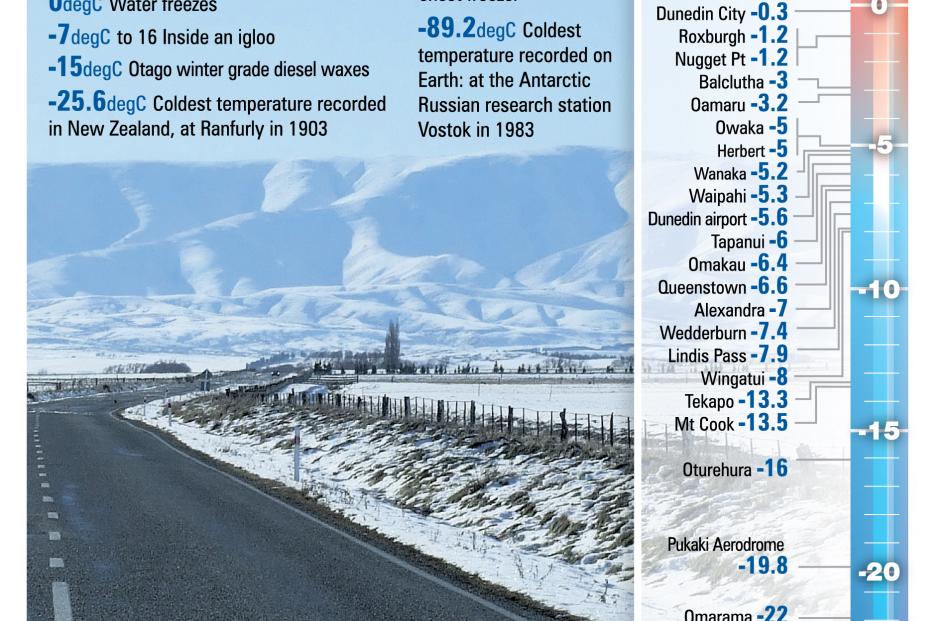 The country's chilly temperatures are edging towards record lows - but we're unlikely to reach them, meteorologists say.

Weather Watch head analyst Philip Duncan said it was a bit colder this morning in many pockets of New Zealand but the country is "a way off" reaching record low temperatures.

Mr Duncan said, while it was cold, the southerly wasn't large enough to make temperatures plummet too much.

"It's certainly cold but quite a long way off where it was, even yesterday, for many places. Northern areas, including Auckland, look like they're a little bit colder today.

"It's always going to get a bit colder as we go into winter," Mr Duncan said.

Auckland would see widespread frosts this morning but the weather in general was a lot more stable across the country with light winds compared to yesterday, he said.

The cold snap started with the snow in the South Island on Friday and a large high pressure system has locked in the cold air, he said.

Temperatures were expected to drop one degree or so just before sunrise, he said.

In the South, another night of sub-zero temperatures led to black ice on Otago roads this morning, disrupted bus services and pushed back start times for some schools.

The Dunedin City Council said this morning there was widespread black ice in the city and motorists should exercise extreme caution, but normal driving conditions are now in effect.

However, special care is still advised on Portobello Rd, Harington Point Rd, Weir Rd and Allans Beach Rd due to the slippery conditions.

Roading contractors in Alexandra said there had been another hard frost, and there was a high risk of ice forming on roads this morning, particularly in damp shaded areas, hill sections and on bridge decks.

The Danseys Pass Road remained closed due to snow, they said.

The Queenstown Lakes District Council has also warned drivers of the conditions, saying the roads would be gritted but motorists needed to drive to winter conditions.

Extreme care should be exercised around daybreak in shaded areas and on overbridges.

The Crown Range had mostly dry roads and grit had been applied in shaded areas. Extreme care should be exercised in the Dalefield area due to ice.

Snow and ice were also recorded on State Highway 94 from Te Anau to Milford Sound and State Highway 8 near Lindis Pass, NZTA said.

Southern Police spokesman Jed Oskam said this morning there had already been a handful of calls in the early hours about the icy roads.

There had been no serious crashes so far, he said.

"It was a real doozy yesterday. At midnight last night we were still getting calls about the ice on the roads in Dunedin and Canterbury.

"That might get even worse this morning. Certainly we would be encouraging motorists to take extreme caution when driving on the roads, particularly in shady areas," he said.

Several Dunedin bus services have been disrupted by the icy conditions, according to the Otago Regional Council.

The Helensburgh and Ross Creek services have resumed their normsl route, but Port Chalmers services are not travelling on any hillside roads into Ravensbourne or Roseneath, and Opoho city services will start from The Gardens - not travelling Signal Hill Road.

Portobello, Macandrew Bay and Broad Bay schools started at 10am today, and Tahuna Intermediate School is closed due to a lack of heating.

This morning is not expected to be much warmer.

Most of the South Island recorded sub-zero temperatures yesterday, including the -20degC at the Pukaki Aerodrome on the edge of Lake Pukaki, MetService meteorologist Stephen Glassy said.

Lake Tekapo and Mt Cook Airport got down to -13degC, while Queenstown, Alexandra and Lumsden hit -7degC.

Dunedin airport dropped to -5degC and Dunedin city just below 0degC, he said.

The coldest temperature on record was -25.6degC at Ranfurly in 1903.

Rick Ramsay, of Twizel, said it was cold enough for him when it reached -15degC at 10pm on Monday.

Pukaki Airport has has been closed to fixed-wing traffic since Friday because of snow.

Frozen pipes left some houses in Twizel without running water, and the extreme cold damaged vehicles, he said.

''The major issue this morning was diesel waxings for many vehicles and with temperatures below zero all day and a hoar frost developing, getting the tanks unwaxed, filters unclogged and vehicles restarted has been a major issue for town mechanics.''

Twizel Area School was open after closing early on Thursday, when snow started to settle. It was closed all day Friday.

''It's the coldest it's been for a very long time, but it's still very pretty.''

Rubbish was being collected by one hardy contractor, though mail was not delivered to some Twizel residents yesterday.

Locals spoken to by the ODT said such low temperatures had come as a surprise to many.

Jared Griffith said the last snowfall of this extent in Twizel was in 2006.

In Central Otago, Oturehua residents were fairly stoic about the temperature there plummeting to -16degC.

The beer was still flowing yesterday at the hotel, but the coffee took a bit longer to produce, thanks to frozen pipes.

No matter how cold it was, the hotel was easy to heat with a log burner, he said.

''There's a second one as well, but it has to be extremely cold - or we have Aussies in the pub - before that one's set going too.''

Frosty nights were welcome, as they meant the possibility of a national curling bonspiel on the nearby Idaburn Dam became more likely, he said.

It was not unusual for cooking oils to freeze in the kitchen and he recalled some spectacular icicles hanging off buildings during other hard winters.

''Last winter, one of the locals was in here and asked his missus if she wanted ice in her drink. She said `Yes', so he brought in an icicle from outside - that brought the house down,'' Mr Jones said.

The Fire Service attended several incidents of sprinkler alarms going off as a result of frozen pipes bursting.

MetService meteorologist Leigh Matheson said severe frosts and similar temperatures could be expected inland across the South again this morning, although perhaps not as extreme.

''It will be a similar situation as today, cold and then a fine, clear day.''

However, for Twizel, there was no good news.

''Unless the layer of low cloud lifts, and that doesn't look likely, it will remain freezing, though maybe not as cold as last night.''

Another MetService spokeswoman said the freezing temperatures were likely to continue across the region until Friday, when northwesterlies would develop, bringing scattered rain.

The showers would clear on Saturday and Sunday would be fine with westerlies, she said.