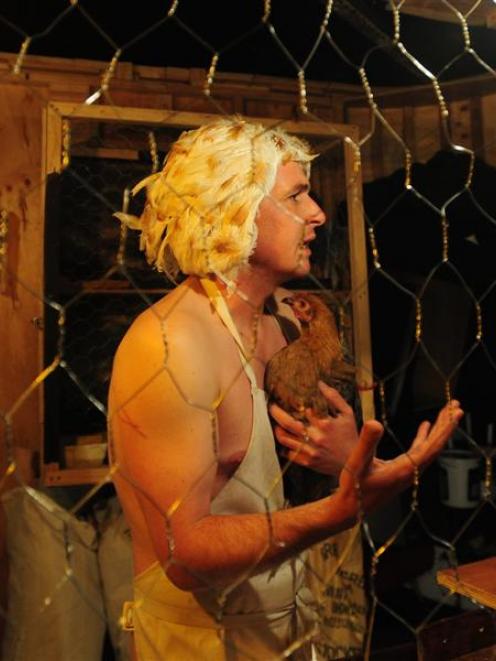 George Parker rehearses Ella and Susn at the Globe Theatre after being detained by police yesterday. Photo by Craig Baxter.
A Dunedin Fringe Festival performer nearly went from the play house to the big house yesterday.

Christchurch actor George Parker was promoting his play, Ella and Susn, when he was detained by police in George St at 3.15pm yesterday.

He was wearing only a feather wig and a cotton apron and carrying a live chicken when spoken to by two female police officers outside Starbucks.

After being taken to Dunedin Central police station in the back of a police car he was warned and later released without charge.

"We'd only walked about two or three blocks when the police arrived," Parker told me after the incident.

"Apparently, they'd had a few complaints about my costume. At one stage, someone came up and asked if I was disturbed. We were amazed that the police got involved."

"I'm absolutely amazed. These performers come into town to try to get people interested in their shows," he said.

"George was just doing his character and taking his chicken for a walk. He wasn't being indecent and I hope the police understand that. We realise this sort of thing can become an issue for the authorities, but it's just part of art performance."

It is not the first time a Fringe performer has fallen foul of the law.

In 2002, Australian Daniel Mounsey was arrested for indecent exposure when he stripped in the Exchange while promoting his show.

There were initially concerns at the Fringe Festival office that the police intervention may have led to the opening night of Ella and Susn being delayed.

However, the show went on as scheduled at the Globe Theatre last night.

Dunedin police were also unhappy yesterday about a gun-toting panda bear in the Octagon, which was promoting the Wellington Binge Culture Collective play Drowning Bird, Plummeting Fish at the Globe Theatre.

I saw the premiere of Lily, a dance work about Dunedin dance doyen Lily Stevens, at the Fortune Theatre last night.

The larger-than-life Bipeds Production featured performers Kilda Northcott and Lyne Pringle as they paid tribute to the ballet teacher 13 years after her death.

A highlight of Lily for me was the 32-strong cast of young dancers from the Dunedin School of Ballet.

Lily plays at the Fortune Theatre Main Stage until Sunday.

Then it was on to Allen Hall, where Christchurch dance company Corrupt Productions paid tribute to late Dunedin artist Rita Angus in Self Portrait.

The Footnote Dance Company rolls into town today for 2009 Made in New Zealand, a showcase of original homegrown dance works set to New Zealand music.

"We've pulled together some of New Zealand's greatest choreographers, coupled them to fantastic homegrown music and together they have created works specially for the Footnote dancers," Footnote director Deirdre Tarrant said yesterday.

"The works in 2009 Made in New Zealand have all got an impetus which is personal. It's thrown up some very personal works. All the choreographers were asked to write about someone in New Zealand who inspired them."

The headline work is Quick Unpick, which was created by former Dunedin dancer Sarah Foster.

"It's a tribute to the North Otago Embroiders Guild, where my grandmother, Jean Leggett, was president for several years," Foster said.

"When I was much younger, my grandma would send me to the Embroiders' Guild holiday programme in Oamaru to learn how to cross-stitch and, later, embroider. It was here that I developed an immense appreciation for hand crafts and, as a result, I continue to create with fabric and thread today.

"The skill of embroidery itself only scratches the surface of the environment that these women create in. There is much truth in the term `stitch and bitch'. It is a place to vent, a place to encourage and a place for a few home truths."

2009 Made in New Zealand opens at Allen Hall at 7pm today and runs until Saturday.