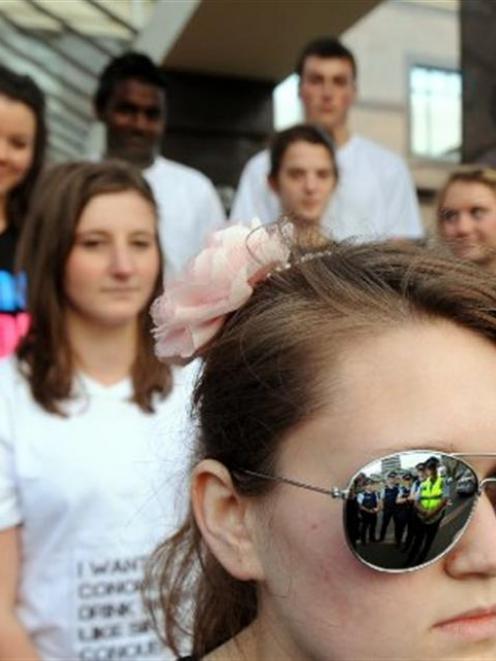 Bayfield High School chairwoman of Students Against Driving Drunk, Emily-Kate Robertson (17, front), and other members of the group will join police in targeting motorists this weekend. Photo by Stephen Jaquiery.
Five plus a day will take on a new meaning around Dunedin at the weekend, with a new campaign promising motorists they will encounter a police officer at least five times on their travels this weekend, Queen's Birthday.

Major checkpoints will operate on the roads in and out of Dunedin during the weekend, with at least 70 police officers in marked and unmarked police cars patrolling the area south to Balclutha, east to Lawrence and north to Hampden.

Speed cameras will be operated across the area, as well as random breath testing at all times of the day and night.

The officer in charge of "Operation 5", Sergeant Chris McLellan, said staff from various police teams, including road police, general duties staff and commercial vehicle staff, would be working on the roads. NZTA and the Dunedin City Council were also involved in pushing safety messages around driving and members of Sadd (Students Against Driving Drunk) would be handing out material and lollipops at checkpoints.

As well as promising at least five sightings of police at the weekend, police would be targeting the five key issues they were concerned about: speed, alcohol, fatigue, driver inattention and restraints.

Queen's Birthday was a statistically dangerous time of the year for road crashes and the goal of the operation was to ensure everyone had a safe trip, Sgt McLellan said.

The official holiday period begins at 6pm tomorrow and concludes at 6am on Tuesday.

The speed tolerance during the period will be reduced to 4kmh over the posted limit.