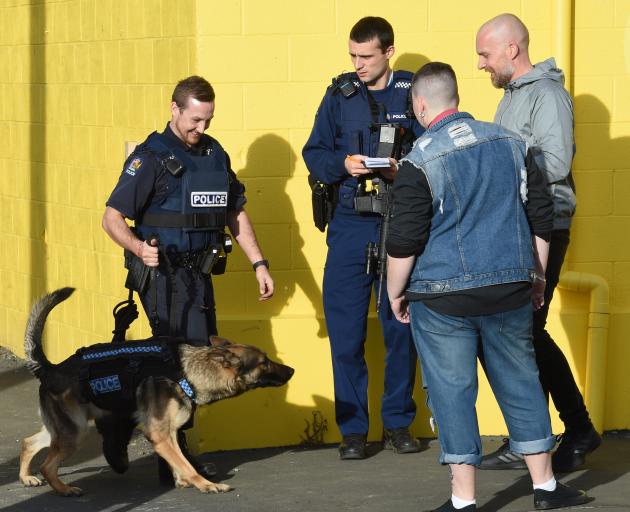 Everyone inside the Dunedin School of Art at Otago Polytechnic was evacuated from the facility as officers with rifles were stationed at either side of the school, in Riego St and Anzac Ave.

Police, including dog-handler Constable Regan Wilson and his German shepherd South, searched the buildings and grounds.

They received the report about 3pm from a person who said a man pulled out what appeared to be a handgun and pointed it at a wall.

Police last night appealed to the public for information about the incident, and described the man being sought as of average build and wearing a black beanie and brown puffer jacket with a pair of sunglasses tucked in his jacket.

A police spokeswoman said an earlier report from police that the man had brandished what appeared to be a gun and asked someone whether they thought it was real was incorrect.

Officers were yesterday in the process of examining CCTV footage of the incident.

Several people who were gathered outside the school declined to comment after they gave statements to police.

Otago Polytechnic deputy chief executive Philip Cullen said no-one had been hurt in the incident and he did not know whether it was a toy gun or the real thing.

"One person got a scare, and rightly so."

Police had arrived soon after the 111 call was made and the School of Art was evacuated and cordoned off immediately, Mr Cullen said.

"A thorough investigation of the scene and inspection of the school's buildings was conducted," Mr Cullen said.

Senior polytechnic staff members had attended the incident as soon as it was reported, he said.

Most of the polytechnic's students were on mid-semester break, but the incident was treated as serious to ensure the safety of staff and learners.

Police had given the all-clear, but would continue monitoring the scene throughout the evening, Mr Cullen said yesterday.

Night classes scheduled at the school in the evening had been cancelled, he said.

A police spokeswoman said yesterday evening no arrests had been made and inquiries were continuing.