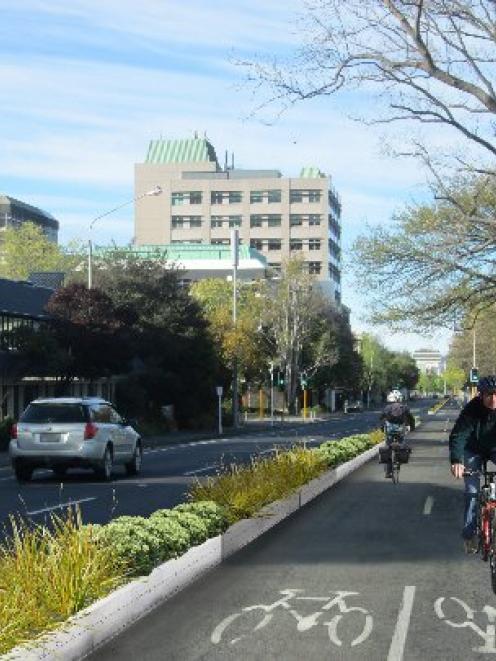 The New Zealand Transport Agency (NZTA) will probably fund cycle lanes on the state highways through the central city.

Otago Regional Council transport policy manager Dr Jane Turnbull said the regional land transport committee agreed earlier this month to recommend the council vary the 2012-15 Otago Regional Land Transport Programme (RLTP) by up to $1 million to make the money available for continued work on the project in this funding round.

That would include up to $125,000 to develop a business case for the three options on the table (all involving a separated cycle lane), up to $200,000 for detailed design work (subject to the outcome of the business case), and the remainder for some construction work in the 2014-15 year should the project progress that far before the present RLTP ended.

The council would consider the recommendation at its May 7 meeting. If it approved the variation, it would be sent to the NZTA for it to consider whether it agreed to vary the current National Land Transport Programme.

The full cost of the lanes is expected to be about $4.5 million, the cost of which is realistically expected to be promoted for inclusion in the 2015-18 land transport programmes.

The request for variation came from the NZTA's highway and network operations arm.

A letter from project team leader Simon Underwood requesting the variations said it was very unlikely the project would be progressed to the construction stage by the end of this RLTP period.

It was expected the business case would be ready by December this year or January 2015. Subject to the outcome of that, the detailed design work would likely start mid-year.

Dr Turnbull said it was decided to seek the variation for the larger amount to avoid having to repeat the variation process should it progress more quickly than expected.