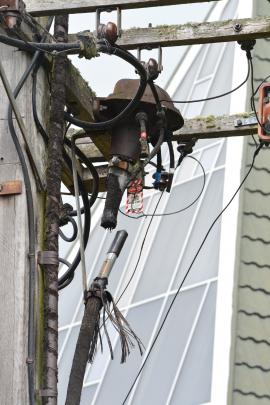 The damaged pothead in Lawrence St. Photo by Stephen Jaquiery. 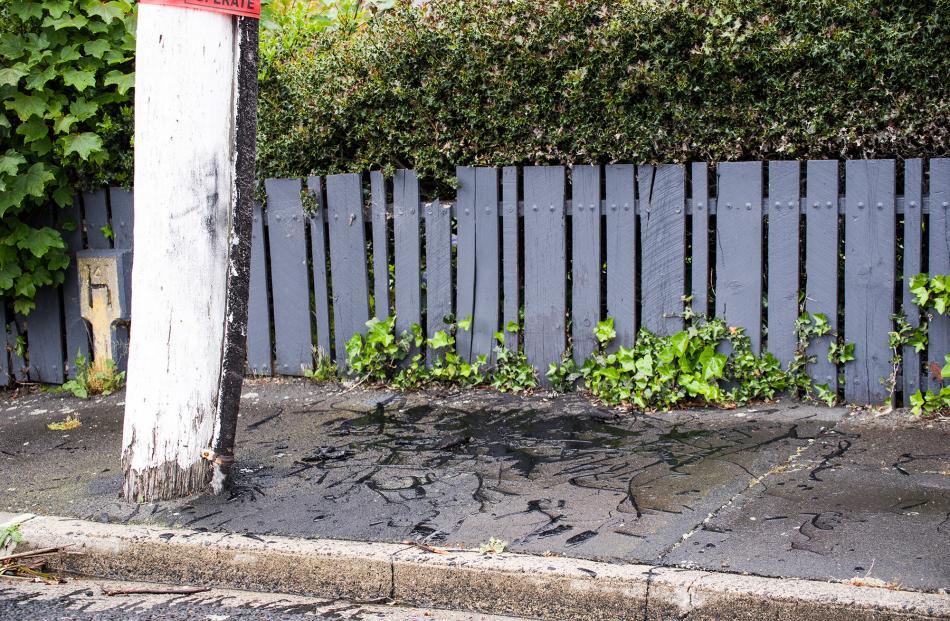 Bitumen on the pavement on Havelock St after a pothead melted down on Tuesday. Photo by Richard Healey.

A pothead on a power pole in Dunedin that failed on Tuesday is the tip of a wider safety hazard that threatens public safety, whistleblower Richard Healey says.

Mr Healey said Delta's response to the Otago Daily Times about the Havelock St incident - which it tried to play down - was ''disingenuous'' and ignored many of the newspaper's questions.

Potheads are an old type of termination equipment that are being replaced because they are dangerous.

Mr Healey said other lines companies had been much more proactive than Aurora Energy in getting rid of them.

Aurora's programme was to remove just 10 a year, and in practice it meant only the ones that failed were removed, he said.

Mr Healey said the Dunedin network had more than 500 potheads, but the exact number was unknown because of poor record keeping.

''It's been very lucky. The pothead melted down internally and all that's happened is that red hot bitumen has dropped down on the footpath. If you were under it you wouldn't think that was a good thing.''

With a ''decent arc'', the cast iron pothead could have ''blown apart'', firing shrapnel into the air ''like a hand grenade''.

The former Delta staff member turned whistleblower said the hazard was dealt with internally by prohibiting staff from working on potheads without disconnecting the power, but ''of course that doesn't protect the public''.

Delta marketing and communications manager Gary Johnson said the Havelock St pothead was found to have a ''slow leak'' of insulating material and was removed.

''They are one type of older-style cable termination and are being progressively replaced on the Aurora Energy network with modern terminations.

''The affected pothead cable termination remained in service until it was removed ... and power was turned off briefly for 15 minutes so the pothead could be removed safely. Power is being supplied by an alternate feed until a permanent repair is made with a new cable termination that will be installed soon.

''Any suggestion of an 'explosion' is incorrect and the insulating material found at the base of pole was consistent with a slow leak,'' Mr Johnson said.

Mr Healey said there was an explosion, but it was contained.

''This is not a 'slow leak'. The pothead is split in three places; it is made of cast-iron that is more than 3mm thick. How exactly did that happen?''

Mr Healey said a second pothead, in Lawrence St, was removed the same day because it was overheating.

Delta and sister company Aurora have been under fire for weeks over ongoing revelations about the state of Dunedin's power poles.