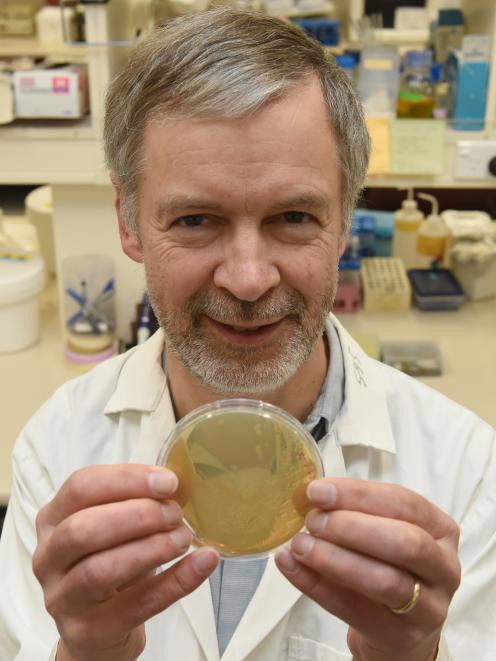 University of Otago Biochemist Prof Iain Lamont is thrilled after being granted more than $1million for his superbug research. Photo: Gregor Richardson
A University of Otago researcher is set to work with scientists from around the world to combat a deadly superbug.

Biochemist Prof Iain Lamont has received a $1.15million Health Research Council of New Zealand (HRC) grant to uncover genetic mutations leading to antibiotic resistance in one of the world’s most problematic superbugs.

The project was among 18 Otago University supported in this year’s HRC funding round.

The target, P. aeruginosa, causes hundreds of thousands of infections each year internationally, and thousands of deaths.

It is part of a growing superbug problem around the world caused by over or misuse of antibiotics, which according to one estimate will result in 10million deaths per year by 2050.

‘‘However, only a subset of the mutations causing resistance have so far been identified,’’ Prof Lamont said.

Prof Lamont’s team, with help from researchers in Australia and the United Kingdom, aims to provide the first full overview of mutations that lead to high-level resistance.

To do this, they will develop highly resistant mutants of the superbug under controlled laboratory conditions and compare the underlying mutations with those occuring during infection.

‘‘Our results will provide a major step forward in understanding how bacteria resist antibiotics and may lead to improved treatment for P. aeruginosa and other superbugs.’’

The study would hopefully identify undiscovered proteins which could be targets for new antibiotics to stop the superbug from growing.

The research would be helped by collaborations with overseas researchers, who had access to more samples and specialist expertise.

P. aeruginosa is a common cause of infections in people with predisposing conditions such as severe burn wounds, cancer, and chronic lung disease due to cystic fibrosis or other forms of bronchiectasis.