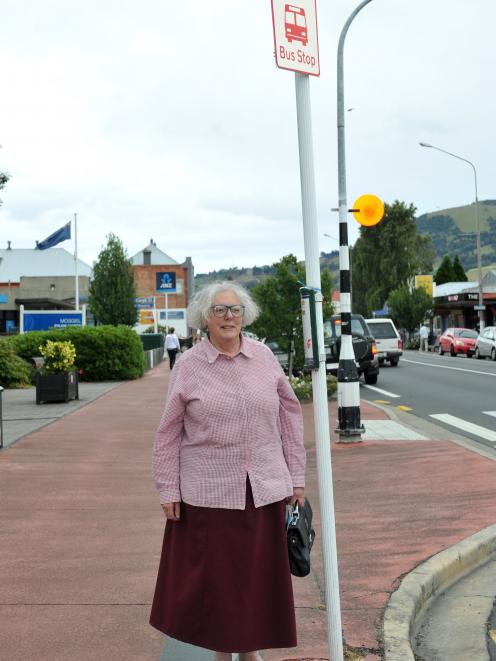 Mrs Hill said the bus from Mosgiel to central Dunedin stopped near the Centre City New World supermarket in Cumberland St, which was close to Dunedin Hospital.

This direct access enabled her to use the 9am bus from Mosgiel to reach the hospital in time for a 10am hospital appointment.

However, this stop will no longer be used, and the route will switch to the planned central bus hub in Great King St, near the central police station, when the proposed bus hub is established later this year.

Mrs Hill said this meant Mosgiel passengers would face ‘‘a downgrade in service’’.

Mrs Hill said she rang the Otago Regional Council and staff confirmed the Mosgiel bus would turn into St Andrew St and then proceed to the hub, instead of stopping in the usual place.

‘‘This effectively doubles the distance that passengers attending the hospital or dental school have to walk, or they will have to wait without shelter for a connecting bus which will travel past the hospital,’’ she said.

Council support services manager Gerard Collings said the development of the bus hub and other related changes would not reduce the quality of the Mosgiel bus service.

He said they were part of council plans to improve the city’s overall service.

All community feedback on the planned changes was being taken into account.

Mr Collings said Mosgiel passengers would continue to receive a good quality service, and considerable thought had been given to providing good access to the hospital and the nearby dental school.

The hospital was only a short walk from the bus hub area, and after the bus hub was ‘‘up and running,’’ buses leaving from the hub would stop at a new bus stop to be established in Great King St, closer to the hospital, he said.

Mrs Hillalso said she was disappointed the information display at the Dunedin Civic Centre foyer last month was not offered at the Mosgiel Civic Centre, or in Green Island or South Dunedin, as part of the bus hub consultation last month.

She was also unimpressed that hard copy paper forms for community feed-back were not provided in Mosgiel.

Mr Collings said the feedback information had been provided at the Dunedin Civic Centre and on the council’s internet site.

He said nobody had been restricted from responding to the public consultation session on the hub.

Of course she is right. Lynne Hill and other bus users are being given the runaround from the Support Services Manager of the Otago Regional Council - the title of which is a misnomer. Poor support. Poor service. Poor management.