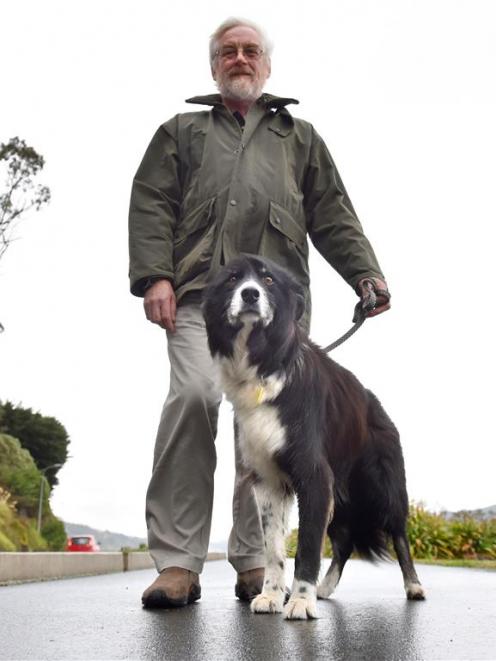 Macandrew Bay resident David Tordoff, pictured here with his border collie Bob, does not approve of changes to Dunedin’s bylaws that would require him to have his dog on a leash on council sportsgrounds. Photo by Gregor Richardson.
Dunedin City Council staff are sifting through the almost 400 submissions on its proposed changes to dog bylaws before a hearing later this month.

The most contentious aspect of the proposed changes was a requirement to keep dogs on a leash on council sportsgrounds. The council was considering the change because of concerns about dog owners not picking up their animals' excrement on sportsgrounds.

The hope was that people with dogs on leashes would be more aware of what their dog was doing, and where it was defecating.

People had a lot to say about that proposition, Ms MacGill said.

‘‘It was quite a strong response''.

Submissions also weighed in on allowing dogs off leashes in Peninsula Beach Rd, Port Chalmers, and limiting the number of cats kept per property. Both were generally supported in submissions, Ms MacGill said.

Another submitter said there were ‘‘far too many restrictions already in place and too few areas where dogs can be exercised properly''.

‘‘Even exercising dogs on a lead is far more restricted than in any other place I have lived,'' David Tordoff wrote.

‘‘It is time the DCC redressed the imbalance they have created and fulfil their obligations under the Act.''

Federated Farmers of New Zealand also made a submission, supporting ‘‘in principle the council's aim to improve protection for wildlife in their natural habitat''.

However, the submission requested ‘‘working dogs'' be exempt from the requirement to be leashed within 10m of protected wildlife.

‘‘As currently worded, the policy and bylaw would require working dogs to be leashed within 10m of a native bird in a paddock - even if it was in a tree - which would significantly impact on the dogs' ability to carry out their function on-farm.''