A groyne remains a possibility for the future of Dunedin’s St Clair Beach, but any push to restore the old timber version may be on the rocks.

Arguments over the merits of the sand-trapping device have flared up amid a broader debate about how St Clair and St Kilda Beaches and Middle Beach should be managed for the next century.

Dunedin city councillor Jules Radich said the deteriorating row of timber poles at St Clair should be restored to their former glory and this could be carried out as a trial to see if they again retained sand at the popular but eroding beach. 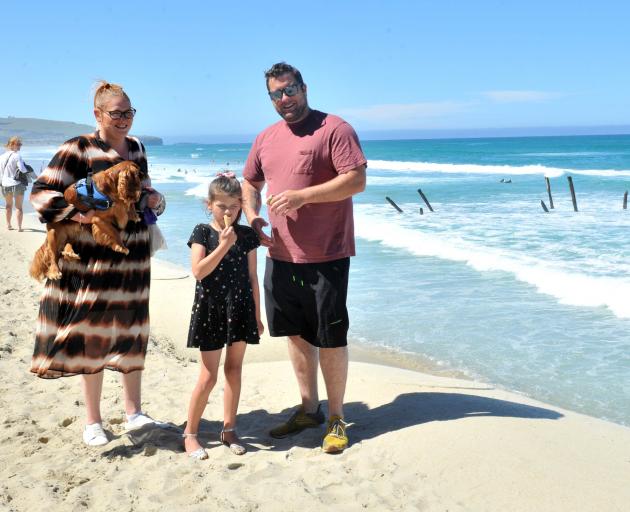 Enjoying a day at St Clair Beach are Jemma and Andrew Wills, of Dunedin, with their daughter Layla (7) and dog Emerson. In the background are what remains of a timber groyne. PHOTO: LINDA ROBERTSON

Cr Steve Walker said the city council would be better off listening to experts.

They had been clear reinstating the structure was unlikely to work and could be detrimental to the beach further down the shore, particularly during storm surges, Cr Walker said.

Even repairing the poles appears to require resource consents, though Cr Radich disputes this.

The Dunedin City Council began a series of workshops about options for Ocean Beach yesterday, putting before the public a series of concepts.

Among the images was a depiction of a rock groyne.

"If it did go ahead, it is more likely to be rock rather than timber," DCC coastal specialist Tom Simons-Smith told the Otago Daily Times.

One development more likely to emerge as a priority from the St Clair-St Kilda Coastal Plan is a redesigning of the St Clair seawall.

In its presentation, the council commented the design and positioning of structures such as groynes and breakwaters would need to be carefully considered, because they could have negative effects on beaches, access and safety.

Mr Simons-Smith suggested if this approach was taken, it would best be done after modelling had generated a better understanding of patterns.

Cr Radich has a website detailing the case for repairing the St Clair groyne and a petition has generated about 2500 signatures.

"I’m calling for a trial of a repaired wooden groyne," he said yesterday.

"No resource consent is required."

"Some old Aurora poles would be fine."

A rock groyne could be considered later, he said.

Cr Radich said the timber groyne was a popular backdrop for photographs and was often depicted in paintings.

"Restoration of a beloved art object is what should be happening."

A report for the city council last year said two resource consents would be required to reinstate a timber groyne — one for disturbing a coastal marine area and another for the groyne to occupy that area.

If the groyne was effective, the effect on the environment would be more than minor, and that would create a regulatory
hurdle.

There may be a little room for argument about the groyne being an existing structure.

Council staff advised last year they did not support building a groyne at the same location to the same standard as before.

Cr David Benson-Pope said he had not seen sufficient evidence to justify pressing ahead with what Cr Radich wanted.

Improving beach access — one of the other themes in the coastal plan presentation — was a higher priority, he said.

Just thinking about DCC's track record. St Clair sea well; not fit for purpose, a complete disaster and lifespan of maybe another 20 years. New Portobello Rd and shared footpath/cycle way: shared path not wide enough for its purpose, sea wall already being eroded in several places, road already being resurfaced. Do I have any faith that they will get this coastal initiative right. NO. Radich seems to be the only one talking sense and I do wonder what expertise they have managed to find given all of the above.

Oh but there won't be much opportunity too to push big money for new stairs and things out the the old boy network I suppose, better hold your line then eh.