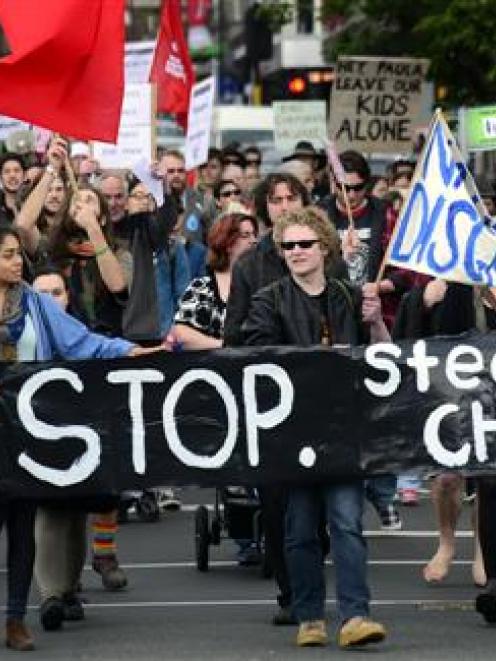 They called for Prime Minister John Key to resign and Social Development and Employment Minister Paula Bennett to "go to hell".

About 150 people gathered outside Work and Income New Zealand in St Andrew St at 1pm with placards, banners and a loudspeaker.

A dozen police officers diverted traffic as people spilled on to the road.

Protesters told the Otago Daily Times Ms Bennett was a hypocrite and her welfare reforms would drive more New Zealanders into poverty.

Dunedin resident Michelle Helliwell said workers and beneficiaries were no better off under the scheme.

"I feel like I'm witnessing a bank robbery where New Zealand's family silver is being taken. This is the gutter of a political system that will create more vulnerable children," she said.

Solo mother and domestic purposes beneficiary Rebecca Alexander said she should be allowed to look after her own child, not forced to pay for child care in order to work.

Women and mothers suffered the most under "punitive" reforms which robbed mothers of the right to determine what was best for their children, Mrs Turei said.

Welfare reforms were the National-led Government's response to its own failure and the war on poverty had become a war on the poor, Dr Clark said.

The protest coincided with others throughout the country for the National Day of Action Against Welfare Reforms.