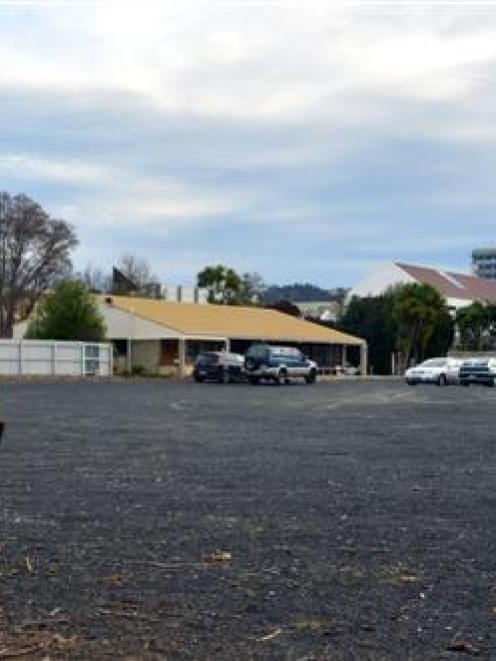 The gravel car park, viewed from the edge of Logan Park looking towards Otago Polytechnic, that could soon be home to Ngai Tahu's planned $20 million student apartment complex in Dunedin. Photo by Peter McIntosh.
A $20 million student hostel to be built for Otago Polytechnic in Dunedin will be an apartment block of up to four storeys, Ngai Tahu Property staff have confirmed.

But first, members of the public will get to have their say on the sale of park land for the project, through a public consultation process expected to begin within weeks, council staff say.

The Otago Daily Times revealed this week Ngai Tahu planned to build the hostel, with space for up to 235 rooms, on land beside Logan Park by the beginning of 2015.

Ngai Tahu Property development general manager Russell Pyne said design work was continuing and he was not yet ready to release concept drawings showing what the building might look like.

Instead, he expected images could be released within about three weeks, once more details were confirmed.

However, it was expected the building would be three or four storeys high, with up to 235 rooms, mainly split between separate five-bedroom self-contained apartments, he said.

Ngai Tahu had a sale and purchase agreement to buy the site from the council for $2 million, subject to due diligence and public consultation, and won approval from city councillors in a non-public vote on Monday.

While details of the public consultation process were not available yesterday, council staff indicated there would be a full round of public submissions, as well as affected party consultation, but no hearing.

Council chief executive Paul Orders had been delegated by councillors to consider the public submissions before making a final decision on the sale.

Council infrastructure and networks manager Tony Avery, speaking on Tuesday, said consultation was a requirement because the property was designated as park land under the Local Government Act.

The site was bought by the council years ago, and was now a gravel car park, but had been deemed ''surplus to requirements'', council economic development and property group manager Robert Clark said this week.

Two alternative options for accessing the site - from either Union St East or Harbour Tce - were still being considered, staff indicated yesterday.