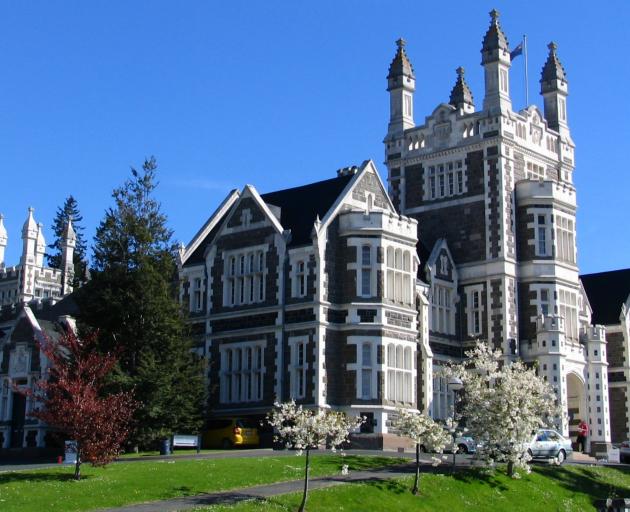 Otago Boys' High School. Photo: Wikimedia Commons
The high school pupil who left Auckland in Alert Level 4 to get to Dunedin is understood to be a rugby player who arrived just ahead of a big game.

Otago Boys’ High School is to play Nelson College in the South Island secondary schools’ final in Dunedin on Saturday.

Otago Boys’ has not confirmed any link between the match and the pupil, who arrived in Dunedin last Friday.

A statement from rector Richard Hall on Tuesday made no mention of rugby.

The pupil’s appearance at school on Monday alarmed staff.

He was tested for Covid-19 and returned a negative result.

He has been in isolation this week.

Mr Hall has said the pupil ‘‘may not’’ have obtained an exemption to travel from Auckland and police are investigating whether a lockdown breach occurred.

It has not been stated by health officials when his isolation stint is likely to end.

Otago Boys’ said yesterday it would seek independent scrutiny of the sequence of events, which included the pupil staying at the school’s boarding hostel on Sunday night and turning up for class the next day.

The school said the pupil stayed with whanau on Friday and Saturday nights.

‘‘The board is in the process of engaging an independent person to conduct a review into the incident,’’ Mr Hall said.

‘‘We will respect the privacy of the individual involved and will not be commenting any further on his activities.’’

Board of trustees chairman Lawrence Alloo said the school was working through a process with the Ministry of Health and other agencies and investigations were continuing.

‘‘We have nothing to add at this stage.’’

Southern District Health Board medical officer of health Dr Susan Jack said the high school pupil was being managed appropriately in accordance with public health advice and in conjunction with the school.

‘‘We will not be commenting on individual details for privacy reasons.’’

Dr Jack has called the situation low risk and the Ministry of Health highlighted there had been no recent cases of Covid-19 in the South Island.

"Dr Jack ... highlighted there had been no recent cases of Covid-19 in the South Island." Exactly!
The 1.04million South Islanders who comply with lockdown rules do so for mutual respect and safety.
Their health & wellbeing was endangered by this act.
It's actually worse than a knife being presented at school, in terms of range and extent of effects if Covid spread ensued.
The community expects a suitable response - expulsion of the offender.

And are the police sitting on their hands?

If all blacks greatest half back and arguably lock can do it........oh wait they couldn’t!

The mighty Rugby. Even children are part of the cult

So, we can assume he won't be playing in the big match, given the breach of rules, and the standard two weeks of isolation now required? Interesting there was no mention of the two week time frame. It reads as if there are some misguided adults supporting this kid's delusions of self importance. At the very least, a punishment should be that he can't play.

It is tiring to continuously hear stories from athletes who feel they should be able to circumvent the rules. The selfish attitude is now evident in the next generation of athletes too it seems.

Not on .... Aucklanders need to understand they are not welcome down this way until the alert levels go down.

The student needs to be put on the naughty step for about 3 months ...

There's too much emphasis put on sports and allowing sports teams into the country when there are stranded Kiwis desperate to get into because they have family members, old, young, healthy, sick ... doesn't matter, THEY should be getting the preferential bookings, not cricket, rugby, or any other sports teams.

I'm double vaccinated and I'm just over 60 ... I'm not concerned about myself, but I have friends and family who haven't been able to get the jab, mostly the younger than 12 yr olds.

Let the sports people who left the country of their own accord ... and the lure of the almighty dollar ... stay where they are and play with their balls until other Kiwi families are reunited.

Well if anyone wants a definition of entitled privilege this is it. And the fact that in hindsight we might have been lucky is not the point. Someone at OBHS decided that rules did not apply to them and they tried to sneak this kid in - for a rugby game. You should have a look at their facebook page and see all the talk about school values, and ask which value are we demonstrating here.

Otago Boys ... can't expect too much.

You'd never find a Kings High student trying to pull a fast one like that !! ;-)