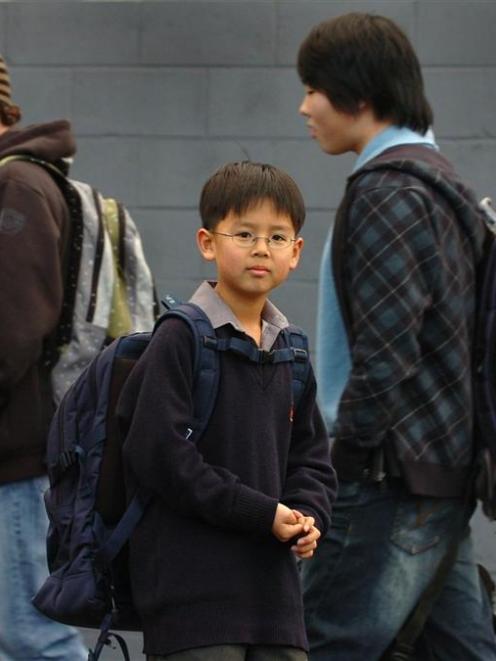 John McGlashan College pupil Semin An (11, centre) models a Chiropak school bag which helps keep his spine straight, unlike the packs used by Sam Sinclair (15) (left) and Eric Kim (16).
The rigours of everyday school life are turning many of New Zealand's schoolchildren into "hunchbacks", a Dunedin physiotherapist says.

Woodhaugh Gardens Clinic physiotherapist Steve August said many children were being left with a "dowager's hump" by today's sedentary lifestyle, in which pupils spend long hours sitting at desks doing schoolwork, working on computers, and carrying heavy school bags, "To an extent, these factors are creating a nation of hunchbacks," Mr August said.

"Walking up George St, I see hundreds of children who are so stooped, the back of their head is in front of their chest. Ideally, your earlobes should be above your shoulders.

Often, these symptoms can plague people well into adulthood," he said.

Mr August has been a physiotherapist for 25 years and said he was one of many in the profession who had noticed a gradual increase in the number of schoolchildren requesting appointments for treatment of these symptoms.

Heavy school bags were part of the problem for pupils, particularly those who carried them over one shoulder.

This created asymmetrical spines in young people, he said.

A typical teenager's school bag contained textbooks, ring-binders, sports gear, lunch and laptops and added up to a weight equivalent to a sack of potatoes on their neck, shoulders and back, he said.

A growing number of Dunedin secondary schools are offering Chiropak backpacks to pupils.

They are ergonomically designed and reduce muscle fatigue and stress on the spine.

The packs have an internal spine which can be adjusted to mould to the carrier's back, contoured adjustable shoulder and chest straps which help position the pack on to the wearer's centre of gravity, waist straps with hip pads to help distribute the appropriate amount of weight to the pelvis, split compartments and compression straps to centre the contents of the pack, a computer sleeve to keep large items close to the body and extra padding for comfort.