Pupils at forefront of climate action

By John Lewis
2 Comments
Decades from now, images of today's school pupils marching down busy urban streets to encourage the Government to address climate change, could well be seen as a defining moment in world history.

And given that Logan Park High School pupils Zak Rudin, Linea Simons, Abe Baillie and Finn McKinlay are passionate and organised in their co-ordination of Strike 4 Climate marches in Dunedin, they are highly likely to succeed.

They are among thousands across New Zealand organising similar events, and Abe said the single thing that brought them all together was "the ever-growing concern about the climate and ecological crisis, and the Government's consistent inaction".

Zak said it was a "massive holistic issue" that could not be ignored.

"It affects all of us, no matter what walks of life we are from."

Finn said although they all had a common interest in climate issues, they also had diverse backgrounds and skills which added to their ability to organise the Strike 4 Climate marches. 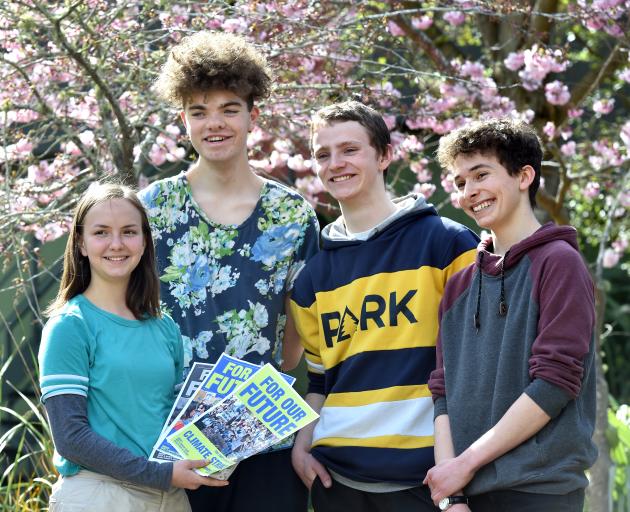 He and Abe are members of a rock band and have experience at organising large-scale public events.

Sound systems, crowd control, security and safety were some of the skills they had learnt in recent years from organising concerts, Abe said.

Zak's skill set was around politics.

He is an Amnesty International youth advocate, he has worked with politicians and MPs, and he has attended many political conferences.

She has done a lot of work, spreading the word to school pupils, community organisations and businesses, and making the event as accessible to as many people as possible.

She said there was also a large support network of pupils across the city who provided the "man power" needed to organise the marches.

People continued to email, offering a hand for jobs ranging from printing and putting up posters, to providing spaces to hold event meetings.

One day, the world may look back on today and see Strike 4 Climate marches in the same light as the protests for civil rights, women's suffrage, and anti-discrimination based on sexual identity.

Why is it that these students never look at the actual global weather data. If they did they would find out that there has been no increase in any form of extreme weather.
Even the IPCC AR5 Science report says so but goes further and adds that none is expected. Media hype for the last 30 years has simply brainwashed them.
As for rising sea levels, did any of the find the actual sea level rise for Dunedin before writing their banners ? Had they done so they would have found that the gauge in Otago Harbour records a rise over 100 years as 1.36 mm/year with no acceleration. Of that rise, 0.67 mm/year is subsidence so the actual sea level rise is 0.69 mm/year. How much of that subsidence is tectonic and how much is compaction is unknown until more sites around Dunedin are tested.
If those students researched longevity of CO2 in the atmosphere they might come across a graph of the decline in radioactive CO2 following the atmospheric nuclear bomb tests that ended in 1963. the decay shows a half life of 10 years. Not the hundreds. of years the IPCC claims. It is therefore impossible for human CO2 to be the cause of the atmospheric increase.
Go learn some facts Kids.

You mean, take note of stats that support your pov.

They are seeing climate change. It is the World they live in.