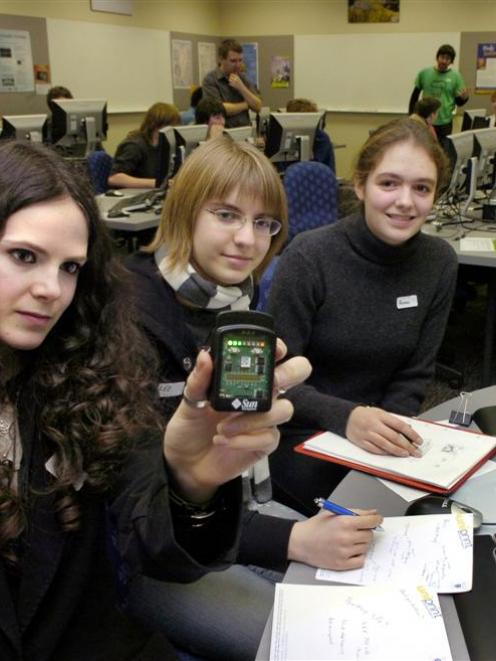 Columba College pupils Amy Anderson, Lee White and Anna Fields hope their idea of using "Sun Spot" miniature computers to monitor and prevent the effects of high winds or earthquakes on buildings could one day be developed into reality. Photo by Jane Dawber.
There was no time for building Terminators at the Otago Secondary Schools Technology Innovation Challenge in Dunedin yesterday.

Year 13 pupils spent their time more productively, dreaming up applications for Sun Spots - miniature computers which can be used to control robots.

A team from Columba College won their category when they came up with the innovative concept of using Sun Spots to monitor the effects of high winds or earthquakes on high-rise buildings or bridges.

Lee White (17), Anna Fields (17) and Amy Anderson (18) said they would use the Sun Spots to control robots which could provide support for areas of bridges or buildings which were losing their structural integrity in the event of high winds or earthquakes.

The technology could also be used to send safety warnings about structurally unsound buildings which were in danger of collapsing.

The idea was one of many creative innovations based around three topics at the University of Otago Information Science Department.

Alongside Sun Spots, pupils also worked on applications for virtual world technology (three dimensional computer worlds in which buildings and friendships can be created) and developed their own online communities like Bebo and Facebook.

The most innovative ideas in each category were given computer-related awards.

Global Network Inter-connectivity Research Project manager Melanie Middlemiss said while the event was designed to foster links between secondary schools and the University of Otago's Information Science Department, it was also aimed at flexing pupils' minds and making them think outside the square.

Dr Middlemiss said it was the second time the event had been held at the university and, because last year's was so successful, it had been opened up to schools throughout the Otago region.