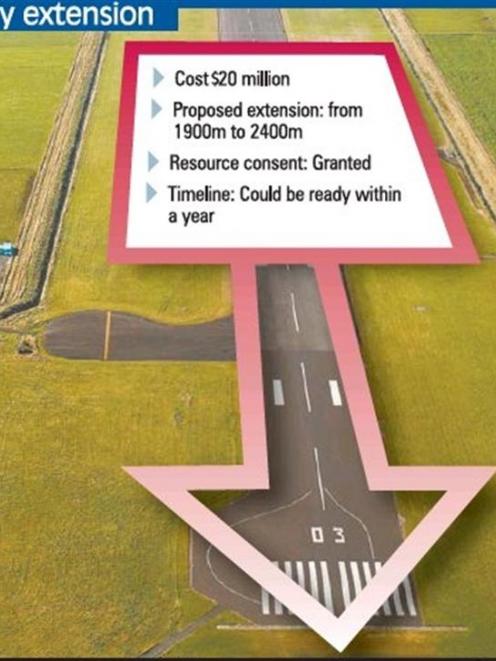 ODT Graphic.
A $20 million runway extension for Dunedin International Airport is a case of "not if but when", airport chief executive John McCall says.

He confirmed this week the company was talking to several long-haul budget carriers about flying into Dunedin, with a 500m runway extension "essential to their business".

The extension would enable larger aircraft, from as far afield as the United States or Southeast Asia, to land at the airport, an attractive option for long-haul budget airlines, he said.

A $20 million runway extension would be a "hard sell" project for the airport, jointly owned by the Dunedin City Council and the Crown, because the "community may not have the appetite for this sort of risk".

Invercargill took a similar risk by extending its runway in 2005, at a cost of $5 million, but no international carrier had committed to the airport, he said.

"Our company would not take on that business risk unless we have commitments. As far as a runway extension for Dunedin is concerned, it is a case of not if but when."

If a carrier committed to the airport, a runway extension could be built within a year, as the airport company owned the neighbouring properties and had resource consent, he said.

"It is something we have always signalled in our plans."

While airlines such as Air New Zealand were suspending transtasman flights from Dunedin and Hamilton, long-haul budget airlines were going from strength to strength, despite a worldwide economic downturn.

When deciding to fly into Australia for the first time, budget carrier Air Asia X opted for the Gold Coast rather than Sydney, Melbourne or Brisbane, Mr McCall said.

A Boeing 747 jumbo flight would add about $1 million of gross domestic product to Otago's economy, so it was not just the airport which would benefit.

"There is no doubt air travel is still the way of the future."

Long-haul budget airlines preferred flying into airports with a 24-hour rating and Christchurch and Dunedin were the likely South Island options.

The city's attractions and close proximity to Queenstown were major selling points, he said.

Budget long-haul carriers often preferred smaller airports, which were cheaper to fly in and out of, and "Dunedin would be seen as a gateway alternative airport to Christchurch".

"If the only thing holding us back is the correct runway length, then doing something about it would give us a greater chance of being able to service their needs".

"This is the sort of infrastructure spend that should be looked at. Christchurch did it and look what happened."