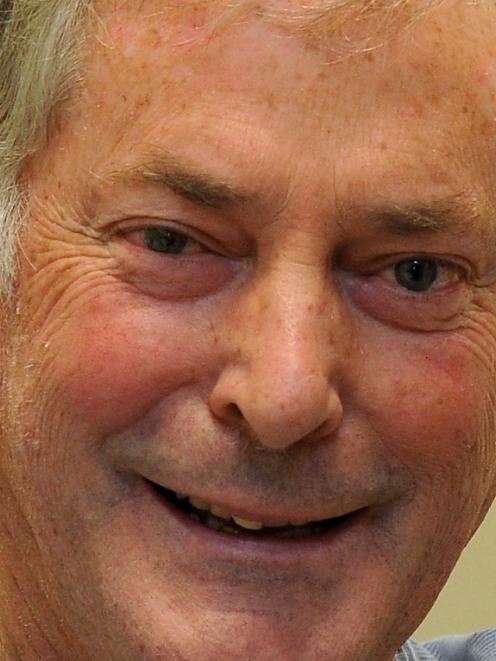 Don Anderson
A radical plan to build a new state highway close to Dunedin's waterfront - freeing other parts of the city from heavy traffic - could be set for another hearing.

The idea, developed by Dunedin planning consultant Don Anderson, would see a multi-lane highway built on rail corridor land between the Oval and the start of State Highway 88.

It would connect to a new, tree-lined boulevard cutting through to a ''major'' inner-city intersection in Frederick St. It would then link to North Dunedin and the Northern Motorway via Cumberland and Great King Sts, which would become two-way, he said.

The new route would replace the city's existing one-way highway network, easing traffic congestion in the central city and allowing a ''world class'' pedestrian-friendly heritage precinct to develop, he believed.

It was also uncosted, would require the main trunk railway to be moved towards the waterfront, and would leave the Dunedin Railway Station marooned from its railway line, operating instead as a museum, he said.

The idea was among 64 submissions to be presented to the Dunedin City Council's hearings subcommittee, which today will begin hearing the public's views on the council's draft transport strategy.

However, subcommittee members - chairwoman Cr Kate Wilson and Crs Andrew Noone, Jinty MacTavish, Teresa Stevenson and Lee Vandervis - would first have to decide whether to accept Mr Anderson's submission.

His was among five late submissions received after the August 19 deadline, and it was up to the subcommittee to decide whether to consider any of them.

The council's draft strategy outlined the key transport challenges facing the city - beginning with improved road safety as the top priority - and proposed initiatives to tackle them over the next 30 years.

That included everything from a multimillion-dollar central city upgrade, aimed at improving the city's flagging road safety statistics, to plans for an eastern freight bypass, although new projects and their exact costs were yet to be confirmed.

The public submissions included calls for the council to take control of the city's public transport system, and to create car-free pedestrian zones along parts of George St, as well as support for more cycleways and a freight bypass.

Submitters appeared divided over a proposal to change the city's one-way network to two-way streets, but others supported a push to reinstate Barnes dance pedestrian crossings in some areas.

Spokes Dunedin secretary Dr Robert Thompson was among those calling for cycling improvements, and urged the council to aim for a goal of no cycling fatalities in the city within 10 years.

Council transportation acting group manager Graeme Hamilton said he could not comment on the feasibility of Mr Anderson's idea, or predict its likely cost, but it would require ''a great deal of discussion'' with KiwiRail and road users.

Mr Anderson first raised his idea in 1993, without success, as a way of freeing up central city land for future retail development, and still believed the idea was a good one.

Removing heavy vehicles and congestion from central city streets could also boost the heritage precinct developing around the railway station, Dunedin courthouse and prison, he believed.

It would leave the railway station marooned from the main trunk line, forcing the Taieri Gorge Railway to relocate, but the benefits outweighed the costs, he believed.

He did not know what the project would cost, but believed the council should sell assets - such as City Forests or the Wall Street mall - to ''recycle'' its capital and help pay its share.

''If you do these sort of recycling things, there's lots of benefits that flow. It just opens up a whole gamut of opportunities,'' he said.

As well as deciding whether to accept the five late submissions, the council's subcommittee would consider another 59 submissions received before deadline. Twenty-eight submitters planned to speak in person during the two-day hearing.

Of the 59 submitters, 26 supported the strategy, four did not, and 29 did not state a position.