A Dunedin property was raided by police as part of a major national drug operation yesterday morning which netted a treasure trove of luxury goods, a massive haul of cash and 10 arrests.

More than 150 police executed search warrants across 17 residential and commercial properties around the country yesterday, the culmination of Operation Maddale, a long-running investigation into the supply and distribution of methamphetamine and associated money laundering.

Ten people were arrested and cash and assets were seized, including a bevy of high-end cars.

Detective Inspector Greg Cramer, of the National Organised Crime Group in Auckland which oversaw the operation, said one person was arrested in Dunedin and a vehicle was impounded and more arrests were possible. 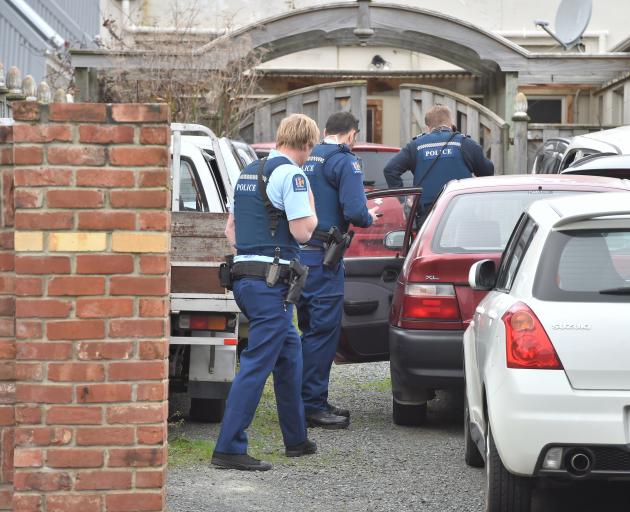 Armed police search a car in Clyde St, Dunedin, yesterday, part of a major national anti-methamphetamine operation. Photo: Gregor Richardson
Police were at a modest property at the southern end of Royal Tce near central Dunedin from early yesterday, speaking to occupants.

The Otago Daily Times understands the occupants had only recently moved into the street.

A man living nearby described them as ''burly'', of European descent and said they were frequently seen on the street outside a property speaking on their mobile phones.

Later in the day officers searched a car in Clyde St which was later towed away.

Police confirmed both scenes were linked to the meth bust.

Det Insp Cramer said his team were thrilled by the results of the raids and spoke highly of the work undertaken by his southern colleagues.

It was ''what might be described as a good day at the office''.

He described the Dunedin search warrant as one small component of a major national operation.

''What the investigation has revealed is a very sophisticated methamphetamine network, which we believe we've placed a very significant dent in.''

Over its 10-month course, Operation Maddale has netted 20kg of methamphetamine, estimated to be worth more than $12 million.

The assets seized included a Porsche Macan, Jeep Wrangler, three Harley-Davidsons, a Ford Ranger, a Yamaha motorcycle, a jet ski and a necklace worth more than $70,000, along with $550,000 of cash.

They will appear in the Dunedin, Christchurch and Auckland District Courts this week.

Well done New Zealand Police,now it's the judges turn to imprison these drug pushers that reck other people's lives...