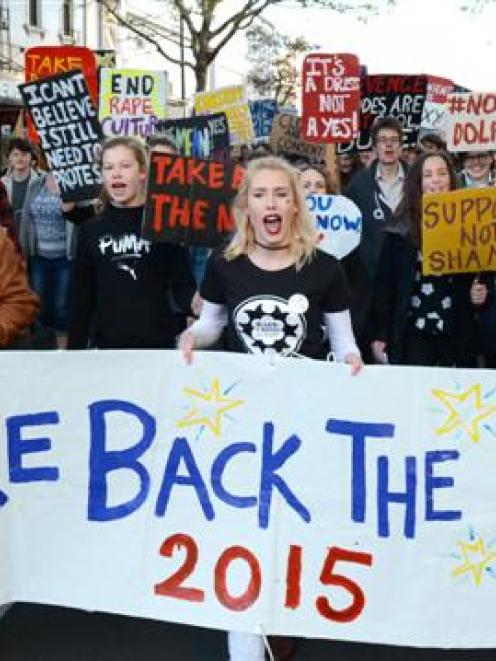 After the 7pm march, they attended a rally in the Octagon, and were entertained by live music.

One of the co-ordinators, Clarissa Neudorf, said Rape Crisis Dunedin organised an annual awareness raising march in Dunedin, and this year the theme had been ''Take Back the Night''.

Jan Logie, a Green Party MP and party spokeswoman for social development, including women, community and the voluntary sector, was among several speakers at the rally.

Dr Rebecca Stringer, a senior lecturer in gender studies at the University of Otago, also spoke.

In a leaflet distributed at the rally, organisers said sexual violence could take place at night in public spaces, but the idea this was commonplace was a ''myth''.

''It is nowhere near as widespread as sexual violence committed in our homes by people we know and sometimes love,'' the leaflet said. This was the first ''Take Back the Night'' march organised in Dunedin for nearly a decade, the pamphlet said.

Ms Neudorf said the rally ''went really well'', and had a positive, supportive mood, and community awareness was raised.