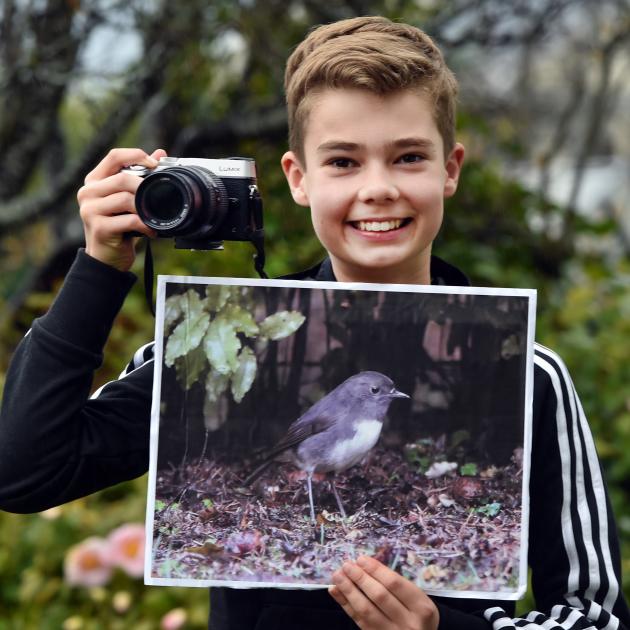 Dunedin boy Jack Aubin holds an image of the robin he and his dad spotted at Ross Creek Reserve at the weekend. PHOTO: PETER MCINTOSH
A young photographer hot on the trail of the South Island robin says trekking through the bush in wet weather on Saturday was worth it for the perfect shot.

Dunedin North Intermediate pupil Jack Aubin (12) and his dad, Chris, were undeterred by the rain when they searched for, and found, a robin at Ross Creek Reserve.

"We looked for about an hour. It was by the reservoir we saw it," Jack said.

It was the second recent sighting of the bird in the reserve.

Last month, a distant picture was taken of a robin at the reserve and uploaded to a citizen science website.

Before that, Predator Free Dunedin technical adviser Mike Thorsen said there had been no official sightings of the robin in the area for about 50 years.

Jack said he and his dad read in the Otago Daily Times about the robin seen at Ross Creek, which inspired them to search.

His father lured the robin by making bird noises and "it came flying really close to us", Jack said.

"They are very tame, so they come very close to you. You stir up the things in the ground, and they find like bugs and insects and stuff."

He knew it was a male, due to its white chest.

He took photos and a short video, and will enter an image in the Otago Wildlife Photography competition.

Jack, who began taking pictures with his mother's old camera, had entered the contest for about four years and had won the jury prize.

He enjoyed photographing plants and birds. One of the best spots to take birdlife images was the Orokonui Ecosanctuary.

Department of Conservation senior ranger John Barkla said the nearest habitat for the species was about 10km away, at Silverstream and sightings of the bird could become more regular after increased trapping and other conservation work.