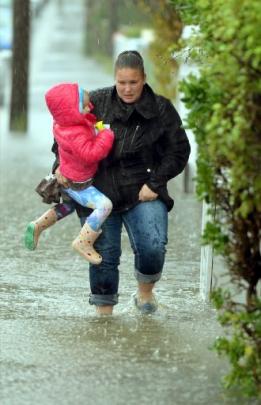 Judith Lewis carries her daughter Sage Lewis-Phillips through floodwaters on Eastbourne street as they head to help a friend with flooding in South Dunedin.

The full scale of destruction across Dunedin will be revealed this morning after a day of record rainfall drenched the city.

No parts of Dunedin were left untouched by yesterday's unrelenting rain, with roads closed by slips, residents evacuated, houses and businesses flooded, rivers rising, and streets left under water across the city.

The effects of the flooding will continue to be felt today,with all primary and intermediate schools, DKA kindergartens in the area being closed, and clean-up and damage assessment to continue.

MetService meteorologist Arno Dayson said in the 23 hours until 11pm yesterday, 160.2mm of rain had fallen in Dunedin, more than double the previous record for a full day (83mm in May 2010) since records began in 2006.

Rain was expected to ease after 2am this morning.

Residents of 150 homes at Woodland Ave, Kinmont Cres and Gebbie St, in East Taieri, were without power last night after being disconnected by Aurora Energy about 6pm for safety reasons.

The rest of Dunedin was put on alert for power cuts as heavy rain continued. Power was cut to the Kaikorai area for about 90 minutes from 7.30pm.

Electricity to the 150 affected homes at East Taieri would remain out until water subsided and power could be safely restored, an Aurora spokesman said.

Volunteers were being called to help sandbagging in St Kilda after 10pm last night.

Dunedin City Council civil defence manager Neil Brown said he could not remember a flooding event affecting such a widespread area across the city in the 35 years he had worked in civil defence.

''There are not many areas that have escaped some sort of disruption,'' Mr Brown said.

More slips were expected overnight and authorities would assess damage this morning, with some road closures likely to remain in place.

''It's going to take a while for things to get back to normal.''

Council roading maintenance engineer Peter Standring said severe flooding of this kind could take time to recede and when it did, damage to roads and other property was likely.

''There could be mud tanks with covers gone or lying on the road and scouring and rocks could also pose a hazard until our contractors can clean things up.

Earlier, he said the cost of the clean-up would not become apparent until ''all the water disappears''.

Southern fire communications shift manager Andrew Norris said firefighters had been ''rushed off their feet all day'', with about 220 call-outs until about 10pm.

Those call-outs included pumping water and evacuating residents, but there were many occasions where there was little firefighters could do.

''A lot of them simply boiled down to giving people reassurance and advice, because while an area may be flooded often there is nowhere for us to pump the water.''

The army offered its resources and an army Unimog truck was used to evacuate children from Abbotsford School.

A police-led forward operating base was established at the Mosgiel library last night as emergency services kept a close eye on the Silverstream, which was threatening to spill into Dukes Rd.

Red Cross and New Zealand Army personnel, with a Unimog truck, were among those on standby at the library, and the Holy Cross College was ready to be used as an evacuation base if needed, Clutha-Taieri area response manager Senior Sergeant Al Dickie said.

There were widespread road closures around the city and some traffic lights were out.

Seventeen hospital and dementia level residents were transferred to Dunedin and Wakari Hospitals.

Several others were being cared for in the community by family members and 31 residents stayed at Radius Fulton overnight. Hospital staffing levels were under control and the DHB was using the 4WD club to transport staff to and from work as required.

The spokeswoman said ''various buildings'' of the hospital campus leaked yesterday and were being repaired as soon as possible.

Patient services were not affected.

She did not know if the clinical services building had been one of the affected buildings.

''This number of leaks are consistent with this level of rain, and all critical areas are functioning well.''

The lower ground loading dock of Dunedin Hospital flooded due to a city main blockage and the DCC visited to assess repairs required.

About 15 people stayed overnight at the Brighton Surf Club after their accommodation and homes were flooded.

Saddle Hill Community Board chairman Scott Weatherall said most of the people relocated from the Brighton Camping Ground, but several of them had come from houses that were flooded in Ocean View and Westwood.

Taieri College was the only secondary school last night to indicate it would open later today, at 10am.

The deluge was not limited to Dunedin, with surface flooding affecting roads as far away as Central Otago.

SH8 from Roxburgh To Millers Flat was closed overnight due to flooding, and a detour in place.