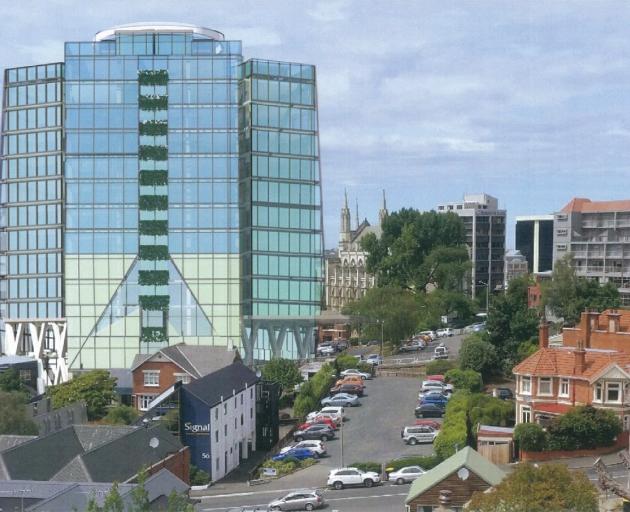 How the proposed hotel in Moray Pl, Dunedin, is expected to look from Cargill St. Image: supplied.
A planner has recommended  rejecting Dunedin’s latest five-star hotel bid, unless the developer agrees to a "substantial reduction" in the building’s height.

The recommendation to decline consent came in a report by independent consult ant Nigel Bryce, made public yesterday, ahead of the public hearing beginning on July 31.

In his report to the panel of independent commissioners, Mr Bryce said the hotel development would "visually dominate" its surroundings, including the town hall, St Paul’s Cathedral and the Municipal Chambers.

It would be the tallest building in the central city and would cast a shadow over the Octagon, as well as the nearby Kingsgate Hotel, during winter.

Together with other impacts, the development was considered to be "non-complying" under the city’s district plan rules.

It would only be acceptable if the building was reduced by four storeys, lowering its overall height from 60m to 45.6m, which was still well above the existing 11m height limit for the site, his report said.

The man behind the project, Tekapo businessman Anthony Tosswill, of NZ Horizon Hospitality Group Proprietary Ltd, could not be reached for comment late yesterday.

Nor could Dunedin Mayor Dave Cull, who was on a flight home from Europe last night.

Mr Tosswill’s plans for the hotel and apartment tower had attracted 265 submissions:  206 were opposed to the development, 58 supported it and seven were neutral.

Six submissions were received after the deadline, but included in the report for the committee to consider.

Mr Bryce was asked to prepare an independent report on the hotel because the council owned the site it  would be built on, if approved.

The development was described as a 17-storey building, including three below-ground levels, providing 210 hotel rooms, 64 apartments, four penthouse suites and a range of other facilities.

However, an accompanying independent urban design report by Garth Falconer, also released yesterday, clarified the project envisaged 16 levels, three of them below ground.

The 17th level was for the lift building at the top of the structure.

Reducing the tower’s height by four levels would lower its overall height to nine storeys above ground, and  three levels below ground, Mr Bryce’s report said.

That would in turn reduce its shading impact and visual dominance, while retaining the space needed for all 210 hotel rooms, he said.

The impact of the lost residential apartments on the project’s viability was not yet known, but could "potentially influence whether this mitigation response is acceptable or not", he said.

The hotel would generate "a number of positive effects", including additional accommodation to support the city’s growing conference and tourism markets, he said.

The hotel’s design elements, including its use of glass and a "tapering" facade, was also "appropriate in this setting" — but only if the building’s scale was ignored, he said.

Its size would mean the hotel would rise above St Paul’s Cathedral and the Municipal Chambers when viewed from the Octagon.

Not only would it block winter sun, it had the potential to "greatly diminish" the amenity value of the setting within which both heritage buildings were viewed.

"Both buildings have a pre-eminence that the proposal will potentially diminish."

Shading was also a "key concern" raised by submitters, and would block sun from reaching the Regent Theatre — a popular outdoor dining area — from 3pm at winter solstice.

"At this time of year, the proposal will effectively remove all remaining access to sunlight received over [the] southern end of the western side of the Octagon."

The report’s contents, including the hotel’s height and the height limit set by the district plan, will be considered when the consent hearing begins on July 31.