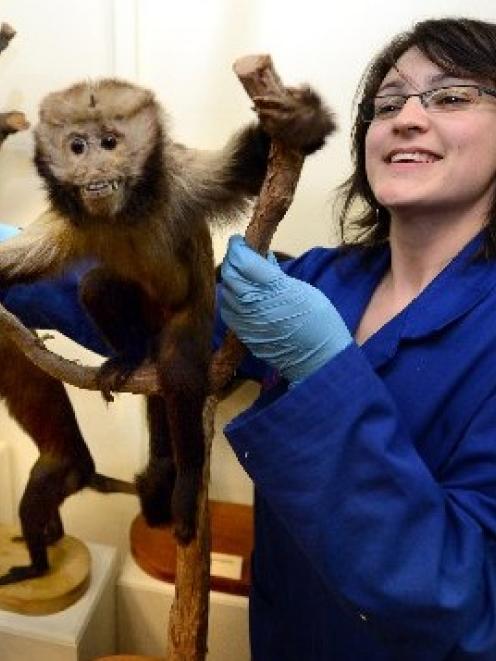 Otago Museum design services co-ordinator Rebecca McMaster positions a tufted capuchin, a monkey from Brazil, in a display case of monkeys from the old and new worlds. Photo by Stephen Jaquiery.
The Otago Museum's popular Animal Attic reopens today after a two-month closure and a great deal of "refreshment" work undertaken to tight deadlines.

The $130,000 "refreshment" involved the biggest change at the much-loved traditional gallery since it was reopened to the public in 1996, after earlier being closed for about two decades, museum organisers said.

The gallery first opened in 1877 and reflects the architecture, display techniques and scientific thinking of the Victorian era.

Mr Paul said the gallery's Victorian charm had been highlighted, and the information within updated to ensure it was scientifically accurate.

New interpretive panels had been added, the beauty of the architecture preserved and the visibility of specimens maximised, organisers said.

Museum staff had worked "incredibly hard" behind the scenes and the attic's large collection of artefacts, comprising 2726 objects, had been temporarily moved elsewhere in the museum before the recent repainting of the gallery.

Artefacts had also been condition-checked and photographed.

The attic had also been re-carpeted and many subtle improvements had been made, including creating a pram park to help young families.

The gallery's table cases had been ordered into taxonomic groups, with new labels, and conservation work had been undertaken by a contract conservator.