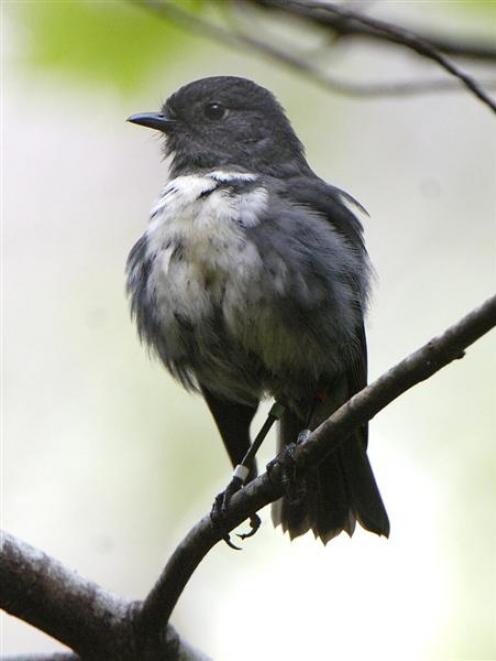 South Island robin. Photo by Peter McIntosh.
Dunedin's population of robins are special and should be protected, a University of Otago researcher says.

Many robin populations around the country have become extinct and the only other population in the eastern South Island coastal area, in Kowhai Bush, near Kaikoura, has declined sharply.

They were now largely only found in large tracts of wilderness, such as national parks.

Graham Parker, who is completing his masters in wildlife management, said this made Dunedin's population, found traditionally in conifer plantation forests and in native forests in the Silverstream Valley, "very special".

To try to find out why the robins had persisted in Dunedin, an area of historical forest clearance and disturbance, he was studying their breeding patterns, their over-wintering survival and their movements out of their parent's territory.

"I'm hoping to get some baseline information."

One year of research had shown 72% of nests failed, mainly because of predation by rats, stoats, cats and possums.

While it was too early to say what this meant for the future of the population, modelling suggested with that level of predation, the population would decline or go extinct, he said.

"We need to protect them before we lose them."

This year's surveying work should give a clearer picture of the robin's future, Mr Parker said.

He believed the future of the population was dependent on the collaboration of the university's researchers, the Department of Conservation, City Forests, the Dunedin City Council and members of the community.

"We want to raise the profile as there is potential for community-led conservation work."

In the process of his work, he had banded more than 100 robins and wanted members of the public to let him know if they saw those that had been banded or any others.

"It will give us more insight into the population's movements."

People could see robins easily in the Silverstream Valley on Tunnel and Macraes tracks, he said.

Eventually, he hoped to take part in relocating robins to the Orokonui Ecosanctuary, where they would be free from predators.

But, even if this happened, it was still important to protect robins in areas where they naturally occurred, he said.