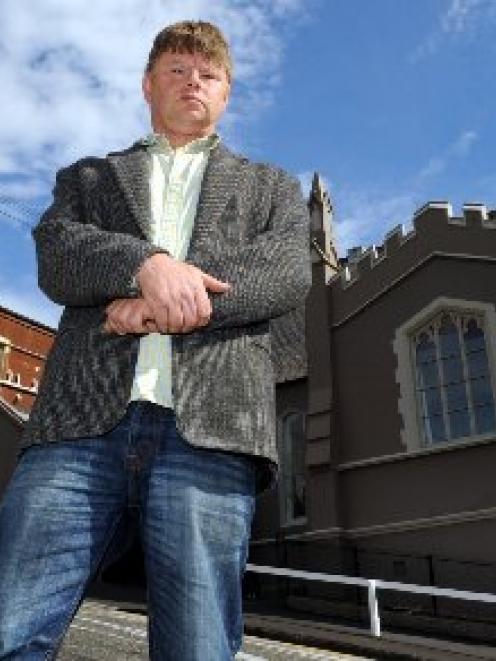 Chapel Apartments owner Jon Leng is fed up with the large flat (at left) neighbouring his property, in View St, Dunedin. Photo by Stephen Jaquiery.
An accommodation property housing up to 19 young people has proved a "recipe for disaster" for Dunedin's View St, residents say.

Drunken party scenes are commonplace, with loud noise and people vomiting and urinating, they say.

Jon Leng, owner of the upmarket Chapel Apartments, has reached the end of his tether with his "out of hand" neighbours, believed to be mostly students.

"I got so hacked off I went in there with a baseball bat [last weekend] ... that's not the appropriate way to behave, but what else am I meant to do? I've got a $3 million business here," he said.

The present tenants, who moved in at the start of the year, said they had their first party on Saturday night. Police and noise control were called but took no action.

"We are not obnoxious people, we are not arrogant. If they [neighbours] were to come around, we would do something about it," one said, declining to be named.

Mr Leng said the property was converted from a backpackers to two flats, with tenants moving in in early 2010, and problems soon following.

"That many students living in one place is a recipe for disaster.

They get drunk and then responsibility disappears. They get out on the street and, before you know it, I've got half of studentville in View St," Mr Leng said.

He believed the disruptive behaviour would impact on his short-term accommodation business, especially if negative comments were posted on the internet.

The Dunedin City Council has 11 noise complaints about the property on record for last year, and one for this year, and said it did not consider the property a problem.

Mr Leng said along with being noisy, the tenants and their friends regularly urinated and vomited on the street, and last year one fell through a window of the Chapel Apartments, he said.

When he spoke to the tenants, they argued it was not them misbehaving but their friends who were visiting, he said.

Mr Leng said he did not mind it being there, "but it should not interfere with my property or the other residents in the street".

"If they want to [urinate and defecate] in their bedrooms, that's fine. Just don't do it on my doorstep. I just want them to respect other people. I've spent my whole life working hard and building my business up ... it's my whole life those bloody kids are messing with.

"They are young students and they are really nice during the day, but as soon as you get them liquored up, they turn into little monsters," Mr Leng said.

This week, he met the University of Otago proctor, who told him he would write to the 11 university students living at the property, telling them to abide by the student code of conduct.

"The students seem to be more scared of him than the police," Mr Leng said.

University student services director David Richardson said: "The proctor is currently investigating this matter and, as such, it is inappropriate to discuss further details about the flat or the individuals involved".

A View St resident, who wished to remain anonymous, said she kept a diary of incidents, which included bottle throwing, racial abuse and graffiti.

One of the more memorable was when she was walking down the street last year and was "followed by a stream of vomit" which was sluiced from a bucket out the front door of the house.

"I've had to clean up blood and [urine] and faeces and all sorts of revolting things. The guys that were there last year were really feral," she said.

While it had "not been as bad this year" as a new set of tenants had moved in, she felt like a "sitting duck" when it came to trouble.

"[The flats are like] a double nightclub, with no closing time and no bouncer on the door. I would like to see the landlord and the building manager take more responsibility for what they've dumped in the street and be held accountable for it. How the hell can they collect money at the expense of all the rest of us?"

She said she would be making a submission to the DCC's planning and environment committee which is looking at extending the city's liquor ban area. She hoped the area could be included in the ban to curb the "carnage" created by an "unruly element".

Mr Leng believed the solution would be to put a property manager on site full-time, "just as they do in a hall of residence".

A tenant, who did not want to be named, said he and his 14 flatmates did not understand what the problem was.

"I just don't think it was that loud and if noise control and the police stayed away, then that's all that needs to be said." He also believed the street was "really tidy, considering how many people we had round here".

Mr Leng's visit the following morning, however, was out of line, he said, as he barged in with a baseball bat and started abusing them.

The flatmates wanted the View St residents to approach them at the time problems arose.

Council environmental health team leader Ros MacGill said the council did not have an issue with the property, as only one noise complaint had been received in the past six months.

"If there was a problem then we would use the tools ... in the RMA [Resource Management Act] and also speak to the property owner-manager to try and resolve the matter," she said.

The RMA gives noise control the ability to issue a noise direction which must be complied with immediately, and for seizure of equipment if re-offending occurred within 72 hours.

If excessive noise and disturbance arose on the street, it was a police matter and noise control officers could seek their assistance.

Council resource consents manager Alan Worthington said the property was a "permitted activity" under the district plan, but that the owner and occupants had a "general duty to apply the best practice" in terms of noise.

Senior Sergeant Craig Brown understood there had been several complaints about the property, but, if an offence had occurred, police often had problems determining who had committed it.