By Mike Houlahan
0 Comments
As befits the widow of the "Brockville battler'' - former Dunedin Ratepayers Association president Syd Adie - Lillian Adie was causing issues for the staff at Glendale Retirement Home as soon as she arrived.

"The first time she came in she called me by my first name,'' Mrs Adie said.

"And I said 'I beg your pardon' and she said `that's the rule here'. I said `you can sling that rule out the window right away'.''

"She'' is Mrs Adie's daughter Toni MacPherson, who works as a caregiver at Glendale.

But her daughter is not the only relative taking care of Mrs Adie at Glendale - granddaughter Nikita, Toni's daughter, has followed in her mother's footsteps, meaning the rest-home has the unusual distinction of having three generations of one family within its walls. 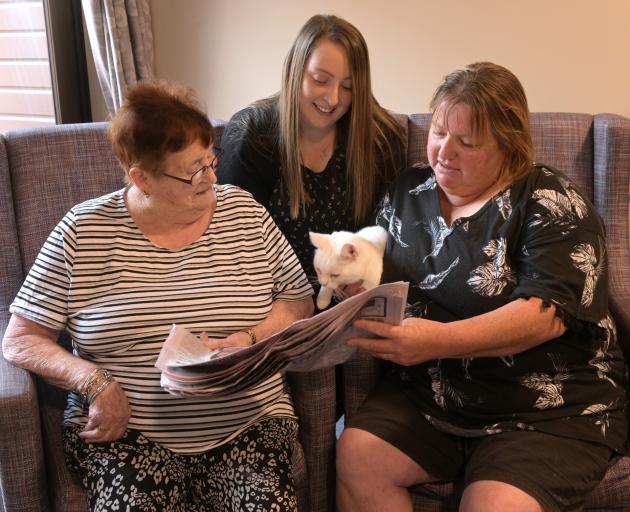 "Mum said if she had to go into a home she wanted to go where we were,'' Toni said.

"We weren't even sure if it was possible for you to work in a home where your family was, but it works really well and we get to see Mum all the time.''

The mother and daughter caregivers divide their shifts, so at least one of them is at Glendale daily.

While each has a list of residents assigned to them, they always check on Mrs Adie too.

Toni began work in aged care by accident. An older daughter who worked in Glendale's kitchen was asked to cover for a caregiver for six weeks, and asked her mother to cover for her.

"I said that'll be fine, I'll do it over Christmas for six weeks, and that was seven years ago and I'm still here.''

Toni trained as caregiver six years ago, a year before her mum moved in.

She had two conditions: a fantastic room, and Toni had to take in her two dogs.

"The thing I miss the most is my animals,'' she said.

"I am in here under protest, but I wouldn't have come without them [Toni and Nikita] being here.''

Despite their banter, there are professional barriers that have to be respected.

"We have a rule that Mum really hates, but it's for safety, that there are no walkers in the dining room,'' Toni said,

"I find it hard sometimes taking it away from her, but sometimes I've just got to do things because it's a rule.''

That said, for the other residents Toni and Nikita are such a constant presence in their lives that they are almost always on duty.

"We often come to just visit, but in this job the residents don't know that you're not working so they ask for us to do something,'' Toni said.

In simple terms being a caregiver means making sure all Glendale's 33 residents are clean, fed and happy - but it involves much more.

"It's not just a matter of giving them a cup of tea and walking away - you have to emotionally and mentally look after them as well,'' Nikita said.

"It's very cool to hear about their lives, where they worked, what they did ... and they like to know what you are doing as well.''

Nikita decided to become a caregiver after seeing her mother at work.

"It definitely does take a special kind of person because it can be hard work, but the rewards you get out of it outweigh that.''

However, she intends to move beyond her initial role and sees a career path in the industry.

To begin with, Nikita is now doing a Careerforce apprenticeship in diversional therapy - devising activities to keep the bodies and minds of older people active.

"I just love interacting with all the residents, and sometimes if you are on shift you can't get around all of them, whereas diversional therapists have more time to talk to them and do activities with them,'' she said.

"It's making sure they're not just sitting around all day, making sure everyone is joining in and being a part of things ... They're not here to sit in a chair and stare at the wall, they are here carrying on living their lives, and doing as much as they can.''