By Hamish MacLean
0 Comments
Firefighting in the 1950s is now a highlight in the Toitu Otago Settlers Museum transport gallery.

Naturally, the highlight is an intense, bright red.

The Dunedin Fire Brigade Restoration Society restored its 1955 Dennis F8 fire engine to look like the Dunedin brigade’s 1954 Dennis F8 appliance and loaned it to the museum for the next five years.

It has pride of place in the exhibit that opened at the weekend, "Firing It Up: Fifty years of preserving our fire brigade history".

Museum staff had done a great job curating the exhibit, he said.

The small fire appliances had been very popular in urban England where they were first produced; they were good in tight city spaces, he said. 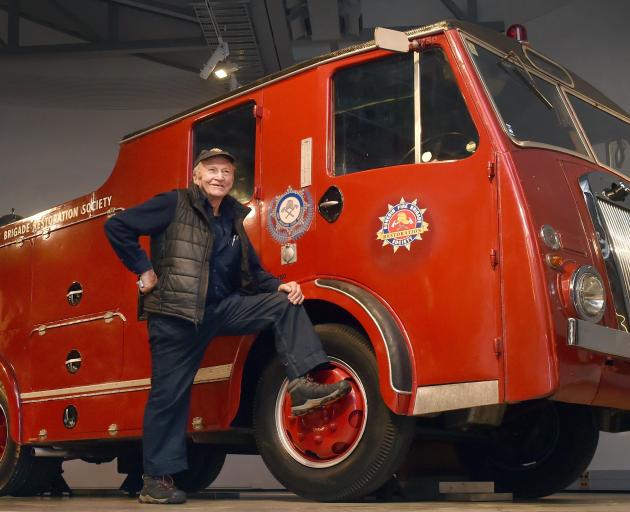 Dunedin Fire Brigade Restoration Society president Gerald Newbury takes a moment with the 1950s Dennis F8 fire engine on loan from the society and on display at Toitu’s transport gallery as part of a new fire brigade display at the Dunedin museum. PHOTO: PETER MCINTOSH
When in use in Dunedin, the small trucks would have been ideal in South Dunedin, or Roslyn, where manoeuvrability was important, the 44-year veteran of the fire service said.

The Dennis F8 on display arrived in New Zealand in Auckland, travelled to Invercargill and eventually worked its way to Balclutha where it was acquired by the society several years ago and driven to their Burnside shop to be restored.

While it was now on display, the 66-year-old fire engine still drove beautifully, Mr Newbury said, ticking over "like a Swiss watch".

Toitu collections and exhibitions manager Jane Macknight said the display, which also includes a uniform and kit from the era and a film of the devastating 1959 fire at the Arthur Barnett department store, in George St, allowed the museum to strengthen its relationship with the restoration society.

And it also allowed the museum to have a classic fire engine on display.

"Everyone loves a fire engine, don’t they?" she said.